The Artists Formerly Known As The Shenanigans 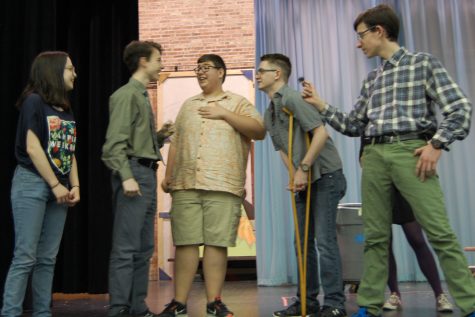 Shenanigans has teamed up to create another hilarious show on May 20. Members of Shenanigans guarantee that the audience can expect a lot of laughs from this one-of-a-kind performance.

“Shenanigans is where jokes go to die in their own beautiful way,” sophomore Shenanigans member Casey Whisler said.

For those who may be unaware, Shenanigans is Riverside Brookfield High School’s improv group. Members of the group describe Shenanigans in various ways.

“Shenanigans is sort of like a cult where, in order to be initiated, you have to be insufferably obnoxious, but you also have to be sorta funny,” senior Shenanigans member Nick Malone said.

With the production only a few days away, Shenanigans members are excited to perform.

“I’m really excited to perform these sketches because we have created fantastic ones for this show,” junior Shenanigans member Rosie Nolan said. “Shenanigans is just a crazy fun time, and I know everyone will enjoy this show.”

Audience members can also expect new things from the event.

“Our last show had a ton of new elements to it, and this show will be the same way,” Whisler said. “We have a lot of surprises. There’s going to be new sketches, new ideas, and we’re adding a lot of costumes, so everything is just bigger.”

Shenanigans is hopeful that they will have a big audience for their show on May 20. They know everyone in attendance will have fun.

“I think people can actually expect a lot of fun times from this show,” sophomore Shenanigans member Taner Guzeldereli said. “It’s a lot of different types of humor, so everyone should be able to enjoy the show.”