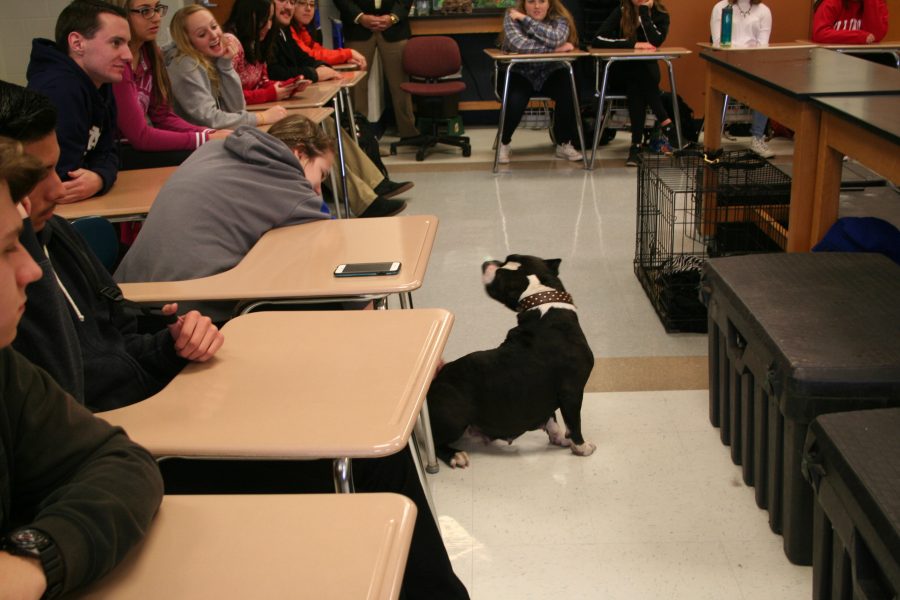 On December 9th, Jaime McInerney, a herpetologist who works at airports, visited the zoology classes to present various species of animals, reptiles, and amphibians. These are profiles on the creatures that made Jalen Brooks react and become viral on the Internet with over 19 million views.

Kimber is an American Bull Temer Dog whose job was to protect officers and law enforcement. She has been trained to withstand various punishments and harm in order to serve. Within three years, this breed of dog will be the standard police dog because it has knowledge of how to attack and stop when commanded by officers. Kimber is capable of fighting three pit bulls at once and has front paws twice the size of back paws for leverage when attacking. Because of its fighting nature, it has taken many trials before Kimber could be officially retired and able to live and be presented in populated environments.

The Burmese python that McInerney brought in is the oldest in captivity at 32 years old. The typical lifespan is 20-25 years old. It will never stop growing for as long as it is alive. Many are capable of reaching 23 feet in length. Burmese pythons are carnivores and like to eat birds, small pigs, and rats.

Hornet Bantam roosters are completely illegal to own as pet because his only job is to fight for money. It is very skilled in its craft and can fight a rooster 5 times its size, with 2 spurs to assist in combat. It is a petri dish animal which means it cannot reproduce. However, since it has been artificially created, it can fly lightly which is a trait that many roosters do not possess. On average, they live for 1-3 years.

Harvey is a Muscovy duck, natively found in the great south american rivers. Many public places, such as Orland Park, buy them to remove swans and geese by drowning them. Muscovies are completely carnivorous and like to eat rats, mice, and snakes. It can go for 3 to four hours without food. Although they cannot fly, hunting prey is not difficult due to their extra joint in each finger to grasp their food, their twelve teeth, and the spurs on the back of their feet. A typical Muscovy duck lives for about 11 years and is full grown after two years at 25 pounds and with all of its features, such as a bone through the side of its wings and bumps on its head to attract mates.

The Uganda Pixie Frog is now an endangered species due to the U.S. cattle industry. It used to be kept as a pet for as low as $40 but now is sold for $2000 or more. The Uganda pixie frog has many distinct features that sets them apart from other frogs such as five teeth that poke out of their heads, the males calling noises to make other male frogs aware of their mates, and their bright orange armpits to attract females. It is also unique because it is the only species where the males are larger than the females. In order to make the Uganda pixie frog grow, you must put it in soil until it forms a mucus layer. This frog in particular has a very solitary existence because he ate his girlfriend during the transport process.

Another frog that was presented was the Hippo Frog, native to South America. It is the most primitive amphibian, being alive during prehistoric times. It cannot be out of water or it will mimic the appearance of poisonous animals like changing its skin to having blue dots and subsequently gold colors. It is carnivorous and although it cannot be on land for long periods of time, it can only eat when it is out of water. They can be bought as pets.

The Jeweled Lacerta is not a typical lizard, with the strongest bite of any lizards its size. They are immune to venomous snake bites and can smell with their tongues, which makes it easier for them to hunt. Common foods to feed a jeweled lacerta include insects like crickets or mealworms and sweet fruits like banana or mushed apple. When threatened, they can hiss, jump to attack, or even lose their tails. They are the most common lizard in Europe, and this specific one was discovered in Peru about five years ago.

Cuban Rock Iguanas are rare to be found in the United States and very endangered. As stated in the name, they are primarily found in Cuba. Due to the state of U.S. and Cuban relations, scientists cannot come up with a definitive number of how many there are left. One reason for the low population of this animal is because of their record to be able to fall off of a cliff that is up to 55 feet high.  If this lizard encounters a cliff larger than that, they will not survive the fall. Since their diet is 95% plants and fruits, their features are used to get away from predators. Some of these include being able to run faster than a cheetah for short distances, having raptor claws to kick, and feathers that harden into spikes. They see water evaporating and heat as colors and use colors to express their moods. Much like a bird, it has hollow bones and is born from an egg. This particular Cuban rock iguana was brought into the country as an egg.

Water Monitors are the second largest lizards, being 8½ to 9 feet. Because of this, it can swallow prey whole and many criminals use them to stuff illegal products inside of. The water monitor that McInerney found was stuffed with heroin, leaving scars on his body from when it was removed. Its brain size is 1/8th of a chickpea. The water monitor typically feeds on squirrels or large rats, although this may be harder for it because it is not venomous and has poor eyesight. Much like the jeweled lacerta, it can smell with its tongue.

Another monitor was introduced to the students: the Nile monitor. They have a reputation to be aggressive to their prey, using their 240 teeth, trained eyesight, and infectious bite. Nile monitors eat crocodile eggs, insects, fish, rodents, chicks, and sea creatures. Unless taken care of by a trained professional, such as McInerney, they typically escape within the first three weeks of ownership. They live to be approximately 12 to 20 years old.