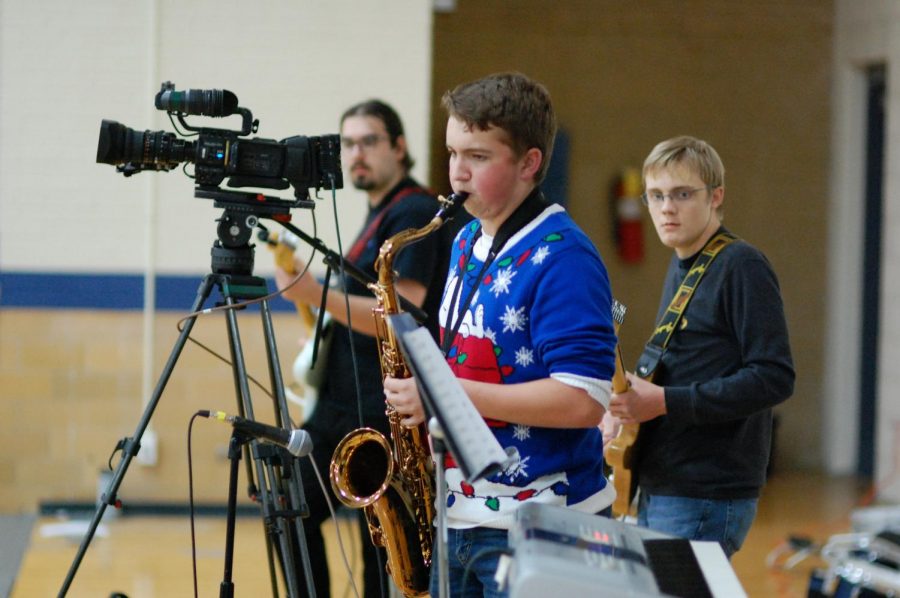 There has been a Pep Band at RB for five years. The band started a month early this school year because the students participating in it enjoy playing so much. Students such as Trevor Bork and Joe Angeloni both said they enjoy it a lot. Bork, who has held a spot on the band playing guitar for three years, plays because he enjoys supporting RB and creating music with friends.

“I think the band is very skilled. The songs they play are really difficult,” said Kelley.

Kelley thinks the fans at the basketball games really enjoy the band playing. She also thinks they like the styles of music that they play.

Kelley thought of the Pep band five years ago because they had one at the old school she taught at.

“The students decide what they want to play and basically run the band themselves,” said Kelley.

“The Pep band consist of four seniors, one sophomore, and one junior,” said  Kelley.

Bork has a passion for what he does. He truly enjoys playing guitar.

“I would like for the team in the future to push and complete harder songs because I would like to challenge the team’s skill level and ability to take on new challenges,” said Bork.

He joined because he liked playing and performing in front of his friends, so for him this is something he enjoys. Bork said, too, that he hopes the band continues to progress musically.

“I would like for the band to play more modern music so we could attract more people into coming to see us perform,” said Bork.

The group’s next performance is Friday, January 5, at a Boys’ Basketball game.