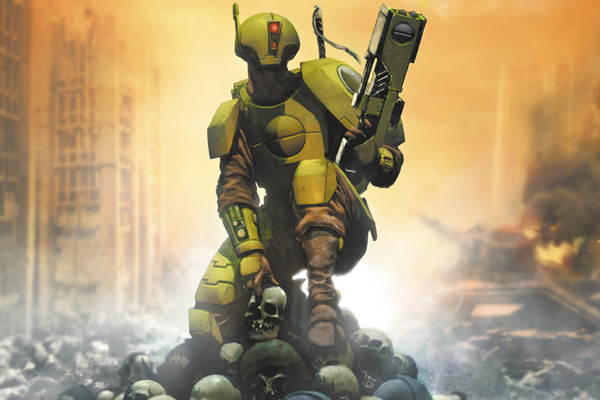 Warhammer 40K is all about conquering the galaxy, whether you’re a Space Marine fighting for the Emperor or you’re part of the Tyranid Swarm trying to feed your hunger, it’s all out war and the galaxy is your battlefield.

Warhammer 40K is such a unique game because it requires a lot of time, but pays off in the end.  In order to play the game players must buy boxes of the units they want to make an army. The units are completely unbuilt and must be glued together after they’ve been purchased.  It may sound like a hassle, but it’s quite the contrary.  It allows for people to completely customize their army.  You’re able to give your troops the weaponry you want them to have, not just the basics, and then it also allows you to mix and match a little bit with their armor.  Perhaps your Dark Angels keep trophies of all of the Fallen that they’ve captured and wear their enemies armor to show their tenacity, or perhaps another army has a cooler helmet or backpack and you want your general to look as awesome as they really are.  Then, not only do you get to build your army your way, you also get to paint them with your own unique style and patterns.  Perhaps your Dark Eldar use a specific insignia to mark their ambush units, or maybe you Imperial guard wears a specific camouflage on their armor, it’s all your decision.

Warhammer 40K as the name suggests, is about war.  However you get to create your scenarios.  You can recreate famous battle from World War two like Operation Overlord but with these futuristic aliens, or perhaps you want to create your battle scenarios where the battle begins as a beach invasion, but you gain more troops as you advance further into your enemies territory, it’s all up to you.  Some people like to create a campaign in which players can play out multiple battles that eventually result in one army conquering the galaxy.

One last awesome part of Warhammer 40K, is it’s history. I’m not talking about how the game has evolved, but how the story in the game is told.  The game takes place in our galaxy in the year 40,000 with nine different alien species and 15 different armies, all that have their own tales of might and power and origin.  Warhammer 40K is rich in its own history, you can read all about the Horus Heresy and how the Emperor was almost killed in one last epic battle with his son.  Warhammer isn’t just a tabletop war game, it is its own world, full of sorcery and tales and good and evil.  It’s incredible reading all of the stories and then being able to re-enact them in a game, or changing the outcome and change history forever.