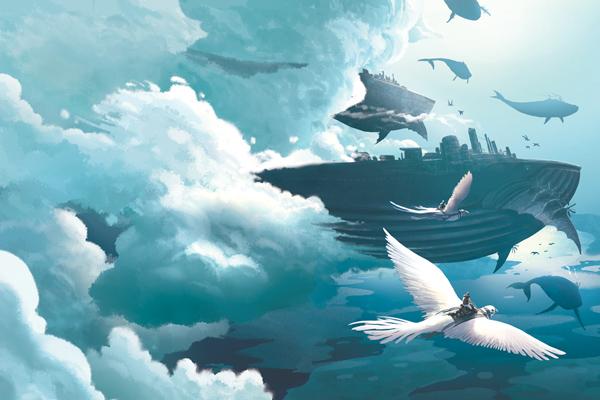 Here we have arrived at the cream on the cake – Flight. There’s not much I can coherently say about Flight, because it’s nothing I can put it into the right words, so here’s the best I got. Flight is different than anything else I’ve previously mentioned, for it’s not actually a graphic novel – it’s a collection of animated short stories. These can range between one page to sometimes 40, and there is an enormous variety of different story subjects and characters. These are written by a selection of different cartoonists, such as Jen Wang (Koko be good), Vera Brosgol (Anya’s Ghost), Doug TenNapel (Bad Island, Ghostopolis), even Jeff Smith (the aforementioned Bone). Some of these stories are set in present day and are about realistic things, like a cuban baseball player or two kids in a play, while others are about fairies and robots and aliens and other things.

The levels of creativity are through the roof in Flight, but what makes Flight so incredible is just how powerful all of the stories are, all for different reasons. Some of them made me choke up a little bit. During some of them I dropped the book laughing. Others play out like an action movie. There are a total of eight installments in the Flight series, and each volume has it all. You can’t help but give the artist’s credit – they only have a short bit of space to make you care about the characters and root for them. Some of them do this better than others, others don’t even try, because it’s not the point. Still, for the most part, within a page of each story, I had already vowed to go punch the author in the face if anything bad happened to the characters.

Regardless, Flight has more to offer than almost anything out there. I still remember some of the stories in perfect clarity. My personal favorite: a little girl who thinks, nay, knows, that she is a princess from Pluto, but now here she is stuck in an ordinary kindergarten classroom. It’s great – she’s not snooty at all, she’s just like YUP I SURE AM FROM PLUTO! Sure, all the kids tease her, but she doesn’t give a rat’s derrierre, and just keeps on doing her thing. Eventually she ends up tryign to fly off of a balcony to retrieve a lost necklace, but forgets that Earth’s gravity is far heavier than Pluto, and ends up in a hospital. The culprit of the lost necklace, who visits her in the hospital, defends himself with “It’s not my fault! She’s crazy! She thinks she’s from Pluto!”

Still, “Why does that matter”?

She goes back to school, AND IS STILL JUST SUCH A SPORT! PEOPLE ARE LIKE BUG OFF AND SHE JUST SAYS D’AWW OKAY AND THEN GOES TO THE SWINGS AND HAS FUN! It’s the cutest darn thing and I was sitting there reading it just laughing and crying and acting as if I’d just watched a rom-com.

But the other thing about Flight is the quantity of different art styles. Some are more conventional than others, some are hand-drawn, some are painted, some are cel-shade, some are watercolor, and then everything in between. One story about the guy who floated into the sky on a lawn chair with balloons (or something) had some of the most amazing watercolors I’ve ever seen on paper. The hysterical renditions of people in Israel Sanchez’ art style always cracks me up and makes me want to read more. There’s always things to look at in Flight and everything will draw you in deeper.