Liberty and justice for all… 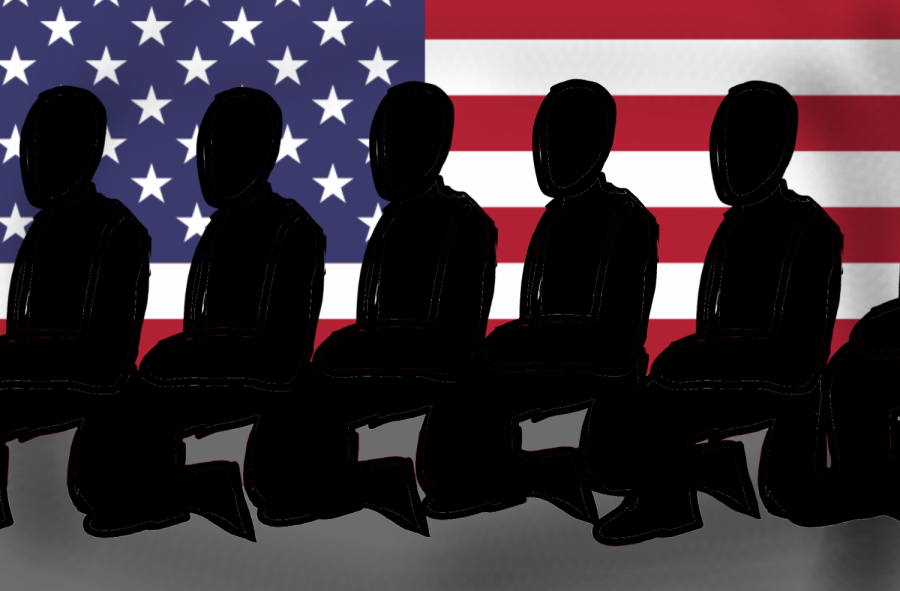 …or not. America is contradicting itself by condemning NFL protesters and their supporters. I am confounded. It seems that the only reason we even still do the pledge and the national anthem is out of habit. We have been brainwashed by history to aggressively defend our country, disregarding our inevitable faults. The deaths of people of colour did not have to be inevitable. Those who are protesting during the anthem are clearly right and we should be kneeling with them.

This is not a cry for attention. Colin Kaepernick and other NFL players are still people of colour, no matter how much money they make. Despite their celebrity status, they still face the discrimination and have the same fears as other minorities. Although an unlikely platform, it is within their right to protest and express their feelings.

Contrary to popular belief, this has nothing to with disrespecting our country, our flag, or our military. The flag and our country have forever been a symbol of freedom, especially the freedom to assemble. Colin Kaepernick and the other NFL players have explicitly said that they are kneeling because of the indisputable racial inequality and police brutality in America. They are respecting the flag because they are kneeling, representing a flag at half mast for the numerous unjust and unpunished deaths of black Americans. This is not an act of hatred or disrespect. This is their right as American citizens, a right that the military has fought to protect. Protest is the best form of patriotism because they are trying to better our country.

Yet again, America is on the wrong side of history. Civil rights activists have consistently been vehemently hated until years later, when we realize that our criticism was founded on prejudice and not based on the well-being of American citizens as a whole. Colin Kaepernick has sacrificed his reputation, privacy, and career for his community and we should support him before we repeat history.

I don’t understand why, in this day and age, a peaceful protest is somehow more provocative than actual hate crimes. We need to recognize that the top priority of our pride needs to shift behind the value of actual lives of American citizens. The fear of recognizing your overwhelming privilege does not compare to the constant terror that people of colour face while being persecuted in all areas of their lives. Although we as white people cannot ever understand what this feels like, we can fight for the victims of this senseless crime in such a simple act, like kneeling for the pledge.