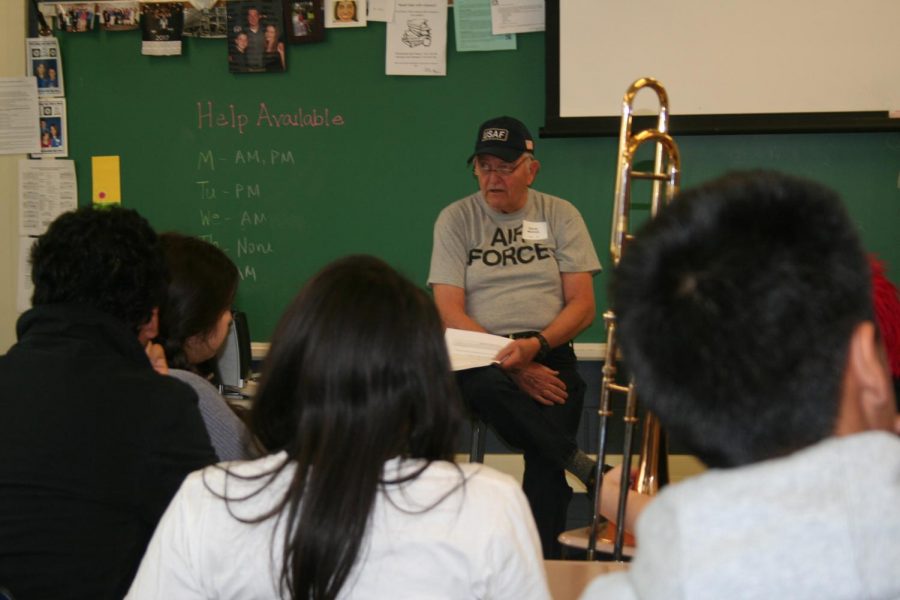 Dennis Martinek speaks to the class about his service.

Dennis Martinek visited room 222 this past friday talk to the students about his experience in the war. Matrinek served in the air force from 1961 to 1971, three years and seven months. “You’d think I wasn’t counting, well of course!” Martinek said. Martinek went to boot camp in Texas. “It wasn’t bad at all. It wasn’t very hard other than it was so hot,” Martinek said.

Martinek enlisted in the Vietnam war because all of his friends were being drafted and he would rather enlist than be drafted. He spent his time in Okinawa, Japan  “I got to paint airplanes. I didn’t really see much combat.” said Martinek. Martineck at the time was spent painting aircraft used in the war.

“Having my uncle and being around airplanes made me want to join the air force I didn’t want to be in the mud. I wanted to be in the airplanes.” said Martinek to the class.

One of the most important things that Martinek took away from Okwana was his experience with the people. “The people were very warm. I think that’s what I like the most from the air force. There was a lot to see. It was a good time really. A little lonely but good overall.” Martinek said. “How to talk to people. A lot of people today are sort of introverted. Once you get the chance to talk all I do is get to listen and learn something new.”

Martinek discussed that there were a few hurricanes that came through during his service. “ When the hurricane came water was just coming in the windows and there was nothing to do but drink and listen to loud music,” Said Martinek.

Martinek discussed the struggles he had when coming home from the war. “It was not very good to a point where you didn’t want to wear your uniform home but times have changed and I’m thankful for that,” Martinek said as he fought tears.

Although Martinek did not see much combat, he still lost some of his friends “A number of my friends died in conflict. You never really think of that but it happens,” Said Martinek.

On Martinek’s ,days off from painting airplanes he said he would go into town and get food. “One of my friends had motorcycles and I would ride it around Okinawa.” Martinek said. Martinek also would fly planes over the ocean. “It was beautiful,” said Martinek. Martinek also learned how to scuba dive during his service in Okinawa.