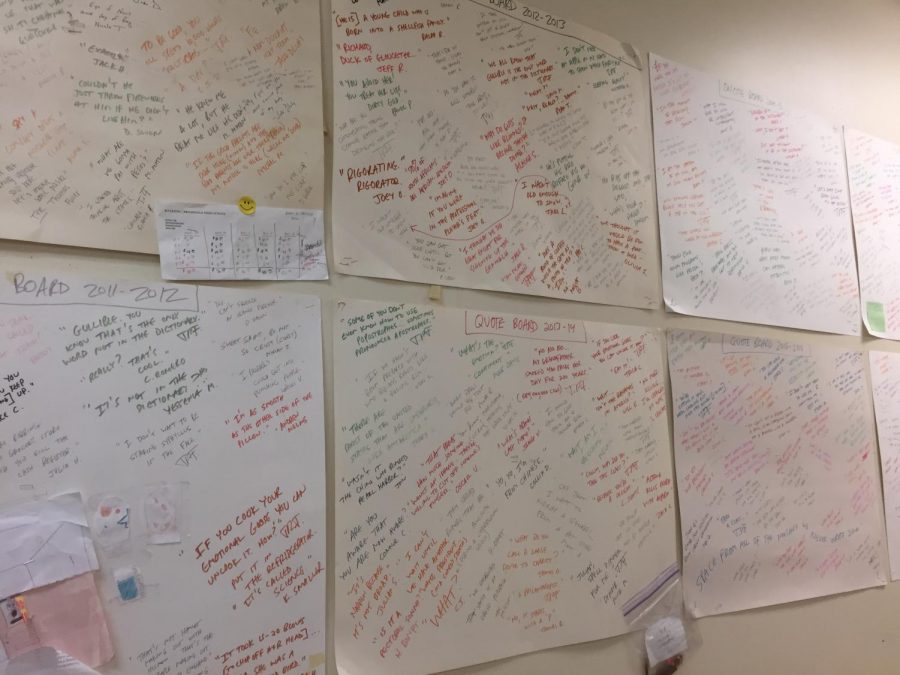 “Every year, I always joke that it starts off as a blank piece of poster board, but it never ends that way,” English teacher Thomas Fuller said.

Fuller started his annual tradition of creating student quote boards in 1994, in his first year of teaching. He was inspired by his

“I started doing the quote boards in 1994, my first year teaching. It was just a funny way at the beginning. We actually started in college because people would say stupid things. We made quote board in college. Anybody said something ridiculous, you’d just put it up on the quote board. So I thought it was kind of a fun way to have some levity and remember a lot of kids and just remember a lot of funny things that students said.

“Unfortunately, I came back in 2002 or 2003 and a custodian had thrown away the first eight years of quote boards. Those are the lost years, so otherwise there would be another eight up there,”

Students names along with their quote appear on the quote board if they say something outlandish, particularly funny,

If anybody says something that’s particularly humourous, ridiculous, they misspeak, or just something that’s so outlandish, they end up immortalized on the quote board. It’s a fun way to help remember a lot of the students from the past and some of the ridiculous things that were said in here.

It provokes good-natured fun more than anything else. Some students take it as a challenge to get up there. Typically, they don’t make it because the whole idea was [that] it was about a faux pas or something that was particularly funny or entertaining or just a completely inane comment. So to try to get on the quote board, it’s the antithesis of what the purpose of it ultimately ended up being. Most people find it hilarious. When someone says something, they’ll lobby to see if something ends up there.