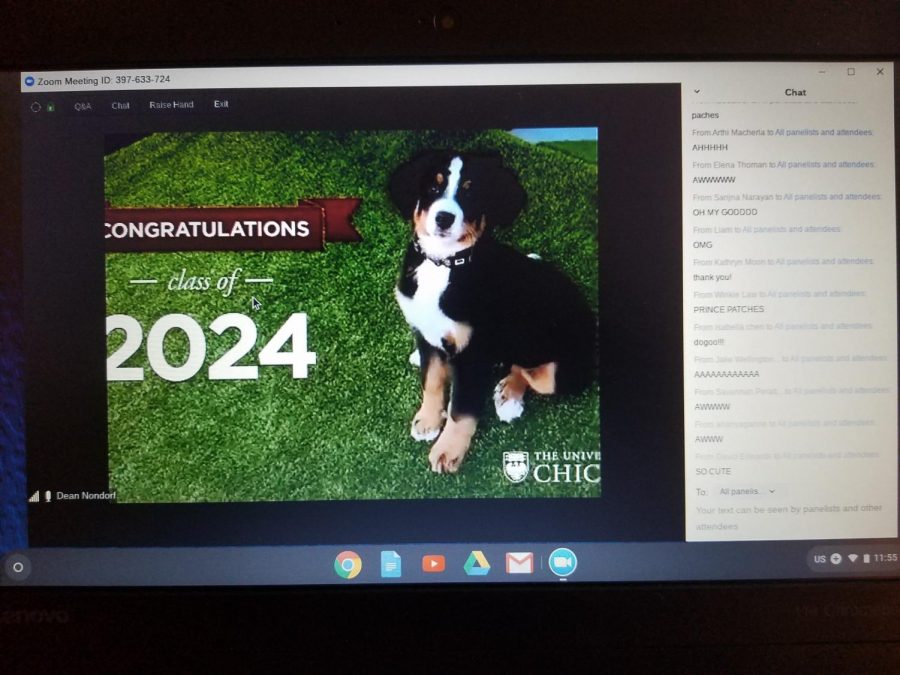 UChicago’s dean of admissions’ dog, Patches, during their Welcome Class of 2024 online event.

After a fun-filled night of doing absolutely nothing, I woke up on Saturday feeling something that I haven’t felt in a long time: excitement.

You see, not only was it my aunt’s birthday, but it was also the day of the University of Chicago’s Class of 2024 Welcome Event, which was held at 11:00 AM through Google Zoom.

Before that, I greeted my aunt with a “Happy Birthday!” (not a hug, of course) and gave her a birthday card that I made for her. I usually go out to buy gifts for my mother and aunt for their birthdays and holidays, so I felt bad that I wasn’t able to do so for both of their birthdays this year.

My aunt actually came back home from vacation three days ago, so we’ve been taking even more precautions when it comes to quarantining and keeping everyone healthy, which is something I’m still not used to.

I brushed my teeth and made sure I looked somewhat presentable in case this UChicago event actually involved us video chatting. Now that I think about it, that would’ve been impossible considering the sheer amount of people “attending” it, but I was still paranoid and made sure I at least didn’t look like a bum.

The event lasted about an hour, and I ended up enjoying it more than I thought I would. The dean of admissions ran it, and several recent alumni and current students came in to talk about their UChicago experiences, including a graduate who works at Snapchat (she may have also helped invent it, but I still can’t tell if that was a joke or not).

They answered our questions and I really liked the vibe that I got from everyone, including the other admitted students in the chat. I even made a joke in the chat that got a couple of laughs, so yeah, you could say I felt a little proud of myself.

I was a little intimidated coming in, but the event showed me that UChicago people were warmer and more fun than I expected. I still don’t know exactly where I’m going to go to college (even though the college decision deadline is coming up soon) but I’m glad I took the time to do this. Plus, it wasn’t like I had anything else going on anyway.

Unfortunately, that was probably the peak of my day. I then ate breakfast at noon (late, I know), and took a shower. I almost forgot to drink my Emergen-C, which I’ve definitely been drinking too much of these past few weeks.

I then went on my phone until I decided to take a nap at 4:00 PM. I must’ve been pretty tired, because I ended up waking up at 5:30. Next, I ate lunch (stop judging me) and started writing this article.

Later, I ate dinner, and after talking to some friends, I stayed up until about, I don’t know, 4:45 AM playing PS4 with my friends and watching Youtube. OK. You can judge me now.

Saying this whole experience has been frustrating is an understatement. Not only has this made testing and the whole college decision process more difficult since I’m not able to visit anywhere, but at this point, I just want to see my friends. The possibility of not being able to finish my senior year is depressing, and I’m constantly asking, “Why now?” when I think about how I might not be able to experience things like Prom and my high school graduation. I know that we were making a lot of preparations to have some family members come over to the States to watch me graduate, but this entire situation just derailed those plans.

Also, the amount of e-learning work that I’ve had is ridiculous. I understand that we still have to “graduate,” but sometimes it feels like I’m getting punished for actually taking the time to do my work.

I know that all we can do right now is stay home and wait, and I’m fully prepared to do that, but it just sucks. The only thing that makes this situation somewhat bearable is being able to spend some quality time with my family, but I feel like they’re already sick of me at this point.

So I’m just left here, stuck. I know I always said I wanted to go home during school, but maybe, just this once, I want to go back? What’s wrong with me?