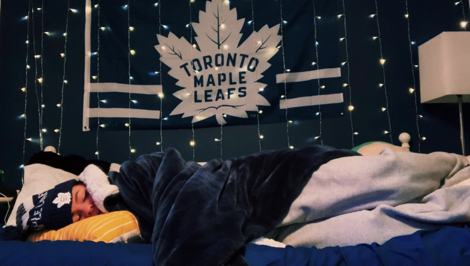 Bridget takes a nap during quarantine.

As much as I love the idea of being able to do absolutely nothing, I hate being forced to. Having to live at home, being stripped of the freedoms of being away at college, I hate it. It has gotten to a point where I am running out of things to do, watch, play, hence my appearance on this container article. So here is a breakdown of how I have spent my time in quarantine.

I was on spring break when I got the email from my school that I had to come pack up my dorm and move out. I was extremely heartbroken that my freshman year was cut so short, and since I am not returning there next year I was unable to say a proper goodbye to all the great friends I had made down there. Ever since then I have been taking classes online through the university, which have proven annoying for I have little motivation to do any of them. I am not getting the same attention from professors, office hours are nonexistent, and the courses I am currently taking require a lot of hands on interaction. This has sent me into an angst regarding getting my tuition back, because online courses cost a fraction of going to a private Jesuit university. My schoolwork has consisted of writing essays, watching pre-recorded lectures, and a lot of drawing. Oddly, it is a lot more than I really had to do when I was actually on campus.

Besides doing work for school, I have been spending my time reminiscing on the time when NHL Hockey games were live. Nothing has been able to fill the hole in my heart that is typically spent watching my boys Alex DeBrincat and Auston Matthews rough it up on the ice most nights. Stanley Cup Playoffs should be going on right now, but instead I am watching replays of past 2019-20 season games and just pretending like I hadn’t seen them before. It can be very exhilarating watching the same Toronto Maple Leafs vs San Jose Sharks game you saw a couple weeks ago and forgetting your Maple Leafs lose it 2-5. This has probably been the hardest thing for me. Although I did get a copy of NHL 20 for my birthday, and learning and perfecting my skills has been keeping me quite occupied. I have never been so invested in video games until all this. I’ve found myself inhabiting Netflix a lot more lately. I discovered a show called Community that I have not stopped watching since first observing it. I finished eight seasons of The Walking Dead as well.

I have accomplished a lot since quarantine started though. I have mastered the art of cooking breakfast foods, and through this discovered that I can make a mean potato pancake. I’ve learned how to cook omelettes the way I like them. I found out how to make hash browns from scratch, it really never clicked in my mind that it was just grated potatoes. At my school there was a Jamba Juice on campus, and since I am not there, I have also been trying out smoothie recipes. I have also become a hairstylist, having cut my own bangs, hair, and have dyed it multiple colors within the last month. Right now it’s black with white bangs, haven’t touched it in almost two weeks now.

Working out has proven an obstacle. At campus I would usually be in the recreation center that was right next to my residence hall as much as I could. Now that gyms are closed I have been at a loss, and have been feeling even more like a potato than usual. I have been doing Just Dance for the Wii occasionally, but it doesn’t hit the same when you’re not a seventh grader in gym class. I appreciate that quarantine is limiting my spending on fast food though. That has had both fiscal and health benefits lately. My sleep schedule has been wack. One day I’ll find myself awake at four in the morning, and sleep until twelve. While another day I’ll be out at six, and wake up at four. My average sleep time, according to my beloved Fitbit, is around 9.5 hours a day. That is just above the recommended amount of sleep people should get. I mean it’s at least better than the three hours I would get while at school.

I do miss the real world. I miss all my friends, I miss my college, and I really look forward to the day that everything goes back to normal. Especially since this is the first year I have had to celebrate my birthday without my friends or family around. At least I have my cat. On a serious note though, don’t be selfish. Stay at home. This is not a time for seeing your friends or window-shopping at Target. For someone who usually goes to target twice a day, I haven’t been in two weeks. If I can do that, so can you. Wash your hands, stay away from others, we are all in this together.