Are riots an effective tool for change?

Among many other things, the past two weeks have been filled with conversations either criticizing the Black Lives Matter protests (turned riots in some cases) following George Floyd’s death or praising them. The critics claim that “violence is never the answer”. They swear passive attempts to “inspire” policymakers and those in power to finally do their job properly—which is to protect and serve ALL citizens, not just those with privilege—will be effective. They refuse to admit that the black community and its allies HAVE been peacefully asking for change since the abolition of slavery. I’d even go as far as to say that historically, visible/measurable change has only happened through protests and riots.

Now with all of that being said, I know there is a difference between peaceful protests and riots, plus looting has made its way into the equation. I think it’s safe to say no one likes violence. In an ideal world, it wouldn’t happen. But all I’m saying is there are instances where it isn’t necessarily deemed justifiable but the reasons for it happening can be universally understood. In other words, I think a lot of people empathize with the boiling frustration African Americans across the nation have for the injustices created by the criminal justice system.

I also find it funny how some riots in the past have even been idolized or commonly respected. But now since black and brown people are the faces of the current ones, they’re being demonized and labeled as “thugs” and “terrorists”, President Donald Trump’s words exactly. Let’s not even get into the President’s hypocritical stance back in 2019 during the ongoing riots in Hong Kong. He publicly backed pro-democracy demonstrators and even criticized China’s leadership for not “meeting directly” with protesters to solve the issue, something he has failed to do himself and has instead opted for sending in the National Guard to relatively peaceful events and encouraging vigilantes to help keep the order. Not to mention the countless officers caught on camera being the instigators of violence at protests and therefore converting them into riots. I’m not saying all civilians involved are innocent but I think it would be unfair to ignore how the news is only telling one side of the story and quickly blaming protests gone awry completely on the civilians. 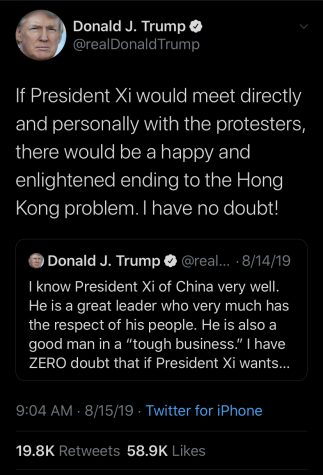 But, pointing fingers and trying to pinpoint the exact moments when protests turn violent is not the purpose of me writing this. I want to debunk the concept of “violence is never the answer”. NFL quarterback Colin Kaepernick tried to do it peacefully, but even peaceful kneeling was immediately penalized. What more can people do? There have been numerous accounts in history where tired, hopeless marginalized groups of people felt like physical opposition was the only way to make change. “Riots are often the desperate response of people who feel they have no other recourse. We can reduce rioting by providing better access to justice for everyone,” said TIME. While you might think differently or believe there’s always “another way”, there is proof of some aggressive protests being effective and therefore worth it.

The one we all know and are taught to love. In an attempt to show resistance towards Britain enforcing the Tea Act, American colonists took over three British tea ships and dumped tea into the harbor.  History.com says, “The event was the first major act of defiance to British rule over the colonists. It showed Great Britain that Americans wouldn’t take taxation and tyranny sitting down, and rallied American patriots across the 13 colonies to fight for independence.”

No, not American but still proves my point. The French Revolution, a series of riots, is seen as the standard, “let’s riot like the French” they say. I mean, I think it’s safe to say the revolution was effective seeing as the civilians overthrew the monarchy and established a democracy. Unfortunately there was bloodshed, and some heads were lost on the way (almost 2700 people were beheaded by guillotine and as many as 50,000 were shot or died of sickness in prison) but some would just call it a necessary evil.

During this time it was still illegal in all states except Illinois to be gay. In response to a police raid, members of the LGBTQ community had violent confrontations with the police outside of the Stonewall Inn, a gay bar that was located in Greenwich Village in New York City. “As the riots progressed, an international gay rights movement was born,” states Britannica.com. At the end of the riots, 21 people were arrested and both rioters and police officers were injured, but it also ignited a very crucial spark for the community’s movement. Previous pleas for discrimination to stop turned into prideful, unashamed declarations of identity and self-expression.

Once again I want to reiterate, I don’t approve of violence and I wish there was a better way for the protesters’ message to get across. But it seems like this recent turmoil has actually begun to wake those up who have been turning a blind eye towards the racial injustice in America. So, would I say there are some riots in the past that have been successful? Yes. But, would I say rioting is the best method to incite change? No, I don’t think the potential casualties are worth it. However I don’t blame people for feeling hopeless, and I think we all should shift our focus from the mere fact that the riots happened, and onto the reason(s) why they happened. And that will bring us back to the whole purpose behind the BLM movement. If the voices of the public were heard in the first place, we wouldn’t be in this predicament. If we tackled the problem at its root then we wouldn’t even have to worry about protests turning violent or protesting at all for that matter. Undeniably, our systems and institutions have failed too many times and desperately need reform, starting there would be a great first step for providing justice and therefore creating peace among our nation.