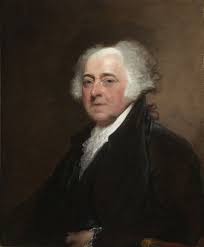 Our second President was 61 years old by the time he took office, and stood only 5’ 7”. Adams never served in the Army, and as a member of the continental congress during the Revolutionary War he never saw combat. Adams spent most of his life worrying about the principles of Federalism, he’s not prepared to fight a teenager, I’ll make pretty quick work of him.