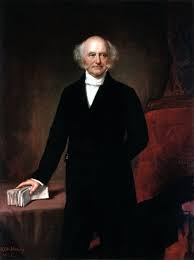 Van Buren was Jackson’s hand-picked successor, but the two men would fare very differently in fights against me. Van Buren stood just 5 foot 6, and was nicknamed “little van” by his critics and allies alike. Frontier legend and congressman Davy Crockett once called Van Buren a “dandy” which is pretty much 1800’s slang for saying “he can’t beat anyone in a fight.” So I’ll win my fight against Van Buren with ease, bringing my record to 5 wins and 3 losses through 8 Presidents.