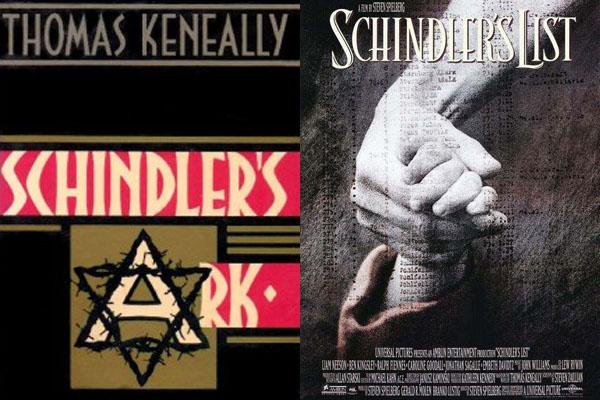 Schindler’s Ark (released in America as Schindler’s List) by Thomas Keneally tells a powerful and real life story about good vs. evil. The story is set in Poland during WWII and follows the life of Oskar Schindler, a womanizing war profiteer and prison camp director who ends up saving over a thousands lives. The novel was adapted by Steven Spielberg (of Jaws, Close Encounters of the Third Kind, Raiders of the Lost Ark, E.T., Jurassic Park, Saving Private Ryan, War Horse, and Lincoln fame) into a film that not only won seven Oscars, including best picture and best director, but is also part of the Western Civ Curriculum.

When I saw this in social studies last year it quickly became one of the most amazing movies I had ever seen.  This movie must have been over two hours long but towards the end I still wanted to know more, what happened after this. Along with the directing the cast is amazing. Among the 126 speaking parts, highlights include Liam Neeson as Schindler, Ralph Fiennes as Untersturmführer Amon Goeth ( who you may recognize in a more recent action-fantasy series as another sociopathic xenophobe) and Sir Ben Kingsley as Schindler’s Jewish accountant. A funny thing that I learned about the casting is that Neeson looks nothing like Schindler whereupon Fiennes is the spitting image of Goeth. From reading the novel I’ve found that the film dramatized some scenes while also shortening and or dramatizing some instances but this is still a great movie. People should still bear in mind that the film is overall true to the heart of the story, which I think is the more important thing. Also if the film included everything that was in the novel it would probably be five hours long and plus if you’re not watching a documentary, what film that’s based on a true story is 100% historically accurate.

I decided to interview Western Civ teacher Erin Cunningham about why teachers would specifically choose to show this film.

“It’s important that students see it as it makes the Holocaust more real. How families were torn apart and how awful it was,” she said. Of course to which my follow-up question was how she felt about how there were some historical inaccuracies.

As this is part of the curriculum there’s a good chance that you are going to see this movie, but if for some reason you don’t, I would highly recommend renting it. Not only is it an amazing movie but I think that it’s also important just to know the extent of what happened during this time period, even if there are some fictionalization.