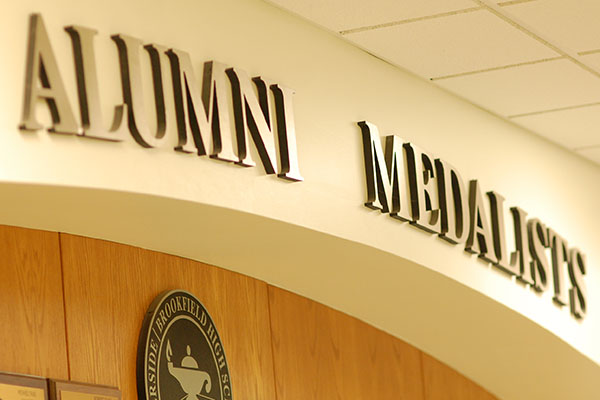 The wall outside the main office showing all Alumni Medalists.

The Alumni Achievement Medal Award is deemed the most prestigious award an RBHS graduate can receive. The rigorous requirements include graduating 10 years prior to the nomination, and one who demonstrates the highest ethical and moral standards, and have gone above and beyond in a professional, athletic, governmental, civic, or fine arts field. One can also be nominated for a heroic deed, or outstanding community service.

As for this year’s nominations, a selection committee had to pick through accomplished and competent individuals. Out of all the nominees, only three were selected: Paul Bronsteader, Gregg Potter, and Ronald G. Slaby, Ph.D. These candidates have had great success in all areas of their lives. The honor included a ceremony and dinner complete with speeches. All three candidates also received a plaque that is hung outside of the main office, with other prestigious alumni who preceded. The dinner was shared over the reminiscence of class memories and laughs. The medalists dined with close family and current school board officials. After the meal, each Alumnus was introduced by a person close to them in their life. The Alumnus then each gave a speech, including their accomplishments and how RBHS has prepared them in life. Clarion was given the opportunity to feature all three medalists. 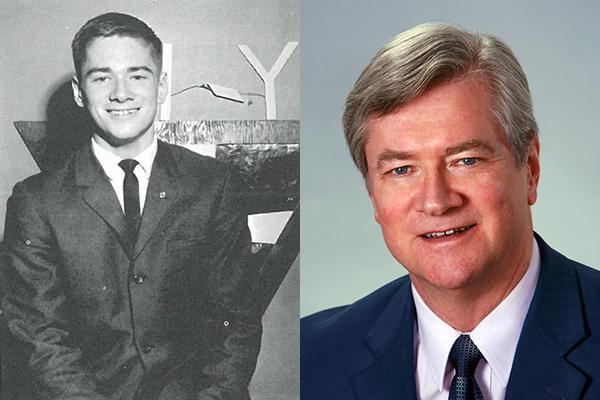 Graduate class of 1962, Ronald G. Slaby, Ph.D. is a developmental psychologist, scientist, and educator. Slaby has his doctorate in Psychology from the University of Wisconsin. He has worked at Harvard University, the Education Development Center, and Children’s Hospital Boston. He contributed to the prevention of youth violence and the influence of media on children and youth. His extensive writings include Early Violence Prevention: Tools for Teachers of Young Children, and Aggressors, Victims and Bystanders: Thinking and Acting to Prevent Violence. Slaby was elected as a fellow by the American Psychological Association.

Slaby was deeply honored to receive a letter from Superintendent Dr. Kevin Skinkis, inviting him to the Alumni Achievement ceremony and informing him that he was nominated. Slaby was extremely surprised to hear from RBHS.

“As an RBHS student, I knew I had sometimes disagreed with the policies of the RBHS administrators, but I never imagined that they would take their revenge by hanging me on the wall 52 years later,” Slaby joked.

He continued to say, “But seriously, I am also deeply grateful to have the chance to recognize and thank many others for all the wonderful support they have given to me.”

Slaby is extremely grateful for the experiences RBHS had to offer when he was a student.

“As an RBHS student, I knew we were obtaining a wonderful education. But now, from the broader vantage point of having spent my career in the fields of education, psychology, and research, I can clearly see that RBHS offered us (and now continues to offer you students) a world-class education,” he said.

Slaby continued, “It prepared me and my classmates to launch off into virtually any career path we chose, and it will do the same for you if you take full advantage of what RBHS has to offer.”

Many of Slaby’s teachers have inspired him, including Mr. G. Keith Weiss, the late Mr. Richard Calisch, and the late Mr. Richard Fogg. He has kept in touch with several of them over the years. He also had the opportunity to meet Ms. Angela Ziola and the psychology classes she teaches.

When asked about his favorite memory from RBHS, Slaby recalls his senior year Sociology class. His teacher, Mr. Richard Fogg, assigned a unique research project that gave students the freedom to research anything they wanted to. The one catch was that each student had to convince the teacher that the topic they picked was the thing that they found most interesting in their lives and wanted to study most of all.

“ We had been taught many things, but we had never before been challenged to identify what was most important to us.” Slaby recollected.

As for Slaby, he picked a topic that is the center of his life now.

“After long and careful consideration, I chose to do a research project on parent-child relationships––a topic that I have continued to pursue throughout my career as a developmental psychologist, educator, and research scientist.” he said.

When asked if he had any advice for current RBHS students, Slaby left some interesting insight from the well-known anthropologist, Margaret Mead, who once spoke to a group of students when he was attending the University of Wisconsin.

Slaby continued, “The same is true for you as RBHS students today. You are indeed highly privileged to have the opportunity to receive a great education, work hard, keep your eye on the prize, and contribute to making the world a better place. I challenge you to do so.” 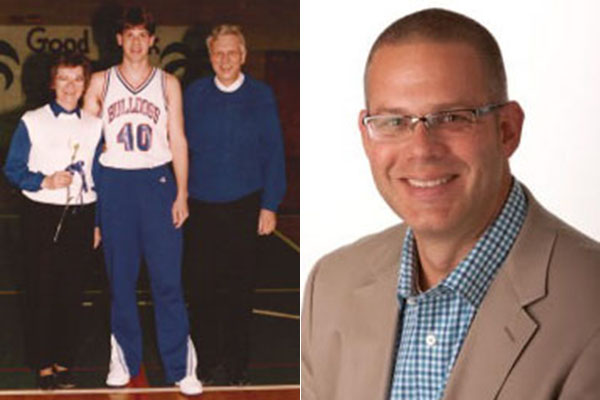 Bronsteader at his senior night with his parents, and Bronsteader now.

Graduate class of 1988, Paul Bronsteader is the co-owner of Kodiak Mobile Television, LLC. He attended Columbia college and received his B.A. in Television production in 1993. He has over 20 years of show-producing experience for major television networks and three national sports Emmys. He has attended the last three Olympics, traveled the world, and has been to world-renown sports venues. He has produced various videos in the health care and education fields. Bronsteader has a strong work ethic and believes in giving back. He regularly takes high school students from his church on mission trips and manages the church garden.

When Bronsteader was notified of the award, he was surprised and humbled.

“I do not think that my career has been that amazing to warrant an award of this nature,” he admitted.

He was nominated by his family, and was surprised to get the call from Superintendent Dr. Kevin Skinkis.

“ I would have never expected this award. I really don’t think that I do anything extraordinary to deserve an honor like this,” Bronsteader said.

Bronsteader considered himself an average student, participating in cross country, baseball and basketball during high school.

“I really liked being on the basketball team and enjoyed the competition.  I am still friends with several teammates from the basketball and baseball teams,” he said.

He had great memories from RBHS and gladly attended reunions with his family.

“I actually remembered my locker combination and, during the tour we took of the school during my 20th reunion, I wanted to see if it was still the same,” he said.

Bronsteader attended the reunion with his both his dad and brother, who both graduated from RB earlier. (1948 and 1978).

“It worked! I left a note in the locker for the student.  I wonder what he or she was thinking when they opened it on Monday,” Bronsteader wondered.

His favorite memories include building floats for the homecoming parades and all four seasons of basketball.

“I think my love of sports definitely started at RB and continued into my career now,” Bronsteader said.

Regrettably Bronsteader was not involved in RBTV when he was a student.

“I really wish I would have been.  I didn’t know I wanted to be in television until I went to college,” he said.

The road after high school for Bronsteader was like most.

“I had no idea what I was going to do when I left RB.  I went to Illinois State as a business major, transferred to Columbia College Chicago after 2 years, and started to really enjoy my new major (Television Production),” he said.

Bronsteader continued, “I had no idea I would ever travel or even knew that there were opportunities like I have had in television.”

“I took several semesters of Area Studies with him and he shared his extensive travel experience with us.  We studied all the areas he had been to personally and he gave us first hand knowledge of so many different cultures. I have been fortunate enough to go to several of the countries that we studied like Russia, China, and Greece,” Bronsteader said.

Another teacher he really respected and enjoyed was his Drafting and Design and Architecture teacher.

“He really taught us the responsibility to get things done on our own,” he said.

All in all, Bronsteader is thankful for attending RB, and is grateful for the things he took away from the high school experience

“RB certainly helped prepare me for my later career.  I am sure it is mostly things that are not really book related but items like accountability, punctuality, being part of a team, and just overall responsibility.  Those are all very important attributes that I have needed in my career,” he said.

On a last note, Bronsteader left some advice for the current RBHS high school students.

“It sounds so cliche… but be yourself.  I know it may be hard to do and sometimes people won’t like you, but you have to make yourself happy before anyone else,” Bronsteader said. 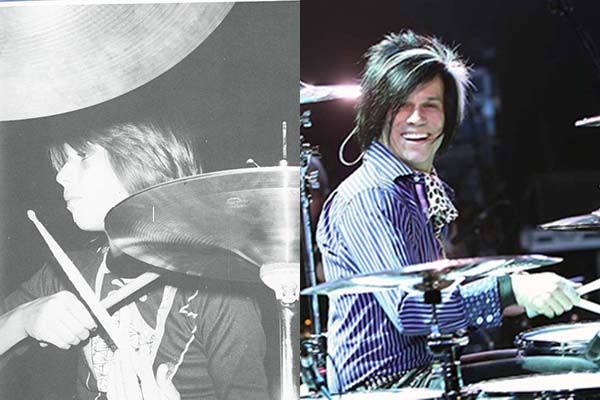 Graduate class of 1978, Gregg Potter is a drummer for the famous Buddy Rich Band. He was part of the RB music program for all four years, and throughout college played in various bands and won awards and contests. His band’s music has been featured in many movies and shows. He has been featured in various major publications including SPIN, Billboard, and MTV. In 2009 he won an Emmy for “Outstanding Achievement for Individual Excellence on Camera.”  Before the Buddy Rich Band, he was in the bands Siren and Teenage Radiation. Potter said he was hand picked to fill Buddy Rich’s spot by Rich’s own daughter.  Carrying on Rich’s legacy, Potter has had major success nationally and internationally.

Potter was notified of his Alumni Achievement medal with a call when he was in the studio playing the drums. He filled out the nomination form and waited until he had heard back.

“I had talked to Biology teacher Mr. [David] Monti about this ‘Achievement Award’ last year. He had explained to me that it might take a while to process nominations. It took almost two years, but it was way worth the wait!” Potter said.

Since high school, Potter always had an interest in the Arts. He knew his main focus was music and drumming, but admits his career has had some interesting paths.

“It was not like, I started a band, had a hit record, and just went on from there. My career took many twists and turns that I did not plan while a student,” he said.

Potter continued, “For example, to go from drumming, to parts in movies. I had not really planned on a film career… as much as I did.”

Potter’s high school experience set him in the path of his career by giving him many opportunities and the freedom to try to pursue anything he wanted to. Specifically in the music department, where Potter participated in the Concert Band, Jazz Band, Marching Band, Summer Band, and competed in band and solo competitions.

As for the general high school experience, Potter is grateful.

“It is not so much one favorite memory out of my years at RB. It is more the combined four years I think back on. I am glad I had a place where I was able to have a full music program, a solid educational background, and a decent student body,” he said.

Potter continued, “Sure, I had my share of bullying and hassles, but nothing like I have seen of others. My teachers were all very helpful and I did well throughout.“

On a last note, Potter left some advice for the current RBHS high school students.

“Follow your dreams! Nothing in life is more fulfilling then setting a goal and reaching it. Even if things turn out different than planned, the execution of the plan and seeing things work out are incredible,” he said.  “Also, do your homework!”