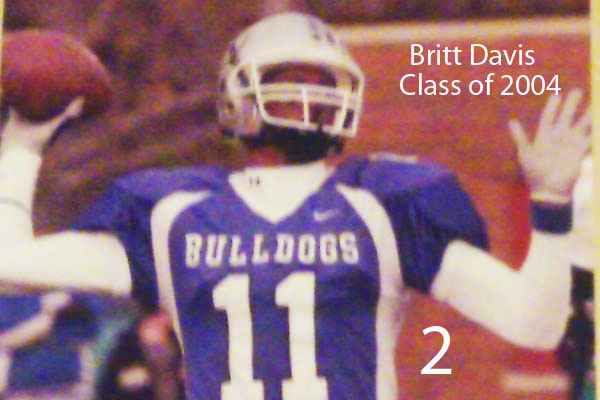 Britt Davis’s career at RB was nothing short of incredible. Davis, a quarterback for the Bulldogs, totaled over 7,700 yards of offense including 90 career touchdowns. Over his career Davis had a 60.2 completion percentage. Davis was a very speedy QB in his time with the Bulldogs. He averaged 8.79 yards a carry on 163 attempts, with 1,434 rushing yards.

Post high school Davis, like other RB football stars, attended Northern Illinois. There he had a very impressive college career. Davis had 146 career receptions, with 1,676 yards, and eight touchdowns.

After his days at NIU, Britt Davis did what only two  other RB alumnus have ever done—he made it to the NFL. Davis was signed by the New York Jets in 2009, and caught five passes in that preseason. Davis was dropped by the Jets and then signed by the Denver Broncos in 2010, where he caught the first touchdown pass of the famous Tim Tebow’s professional career.

In 2012 Davis was signed by the New England Patriots.  In the preseason of that year Davis caught a touchdown pass from Brian Hoyer; however on the play Davis sustained an injury. He was subsequently dropped by the Patriots, and that touchdown catch was the final play of his NFL career.