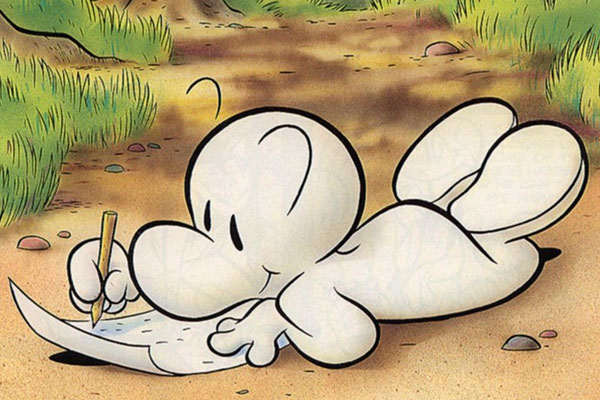 I feel like some part of almost everyone from my generation knows about Bone. It was all the rage a few years ago; all the volumes (9 in total) were being released in color and everyone in elementary school was flipping out over them. I had already read some of them in the library and bought the omnibus of the entire series (hah, hipster) and I loved it. The book broke (because books can break) in half, so I had it in two parts. I lent the second half of the book to a friend and he never gave it back (no matter how much he insists he did, I know he didn’t, and if he’s reading this, he knows who he is ^.^), so I’ve never been able to rekindle my love for the series for years.

Written by Jeff Smith, the bone series is about three brothers, aptly named Bone, fleeing from their home town due to some less than pleasant shticks in politics, and they come across a foreign valley with actual people in it, where they get into more trouble. However, even though Phoney Bone (the politician) gets a run for his money with the townsfolk, the problems transcend beyond just a few get-rich-quick schemes on Phoney’s part. The dragons have awoken, the rat creatures are on the move, and theres news of a mysterious hooded man. The Bones get caught in the web of action, and Phoney becomes a political leader, Fone Bone becomes a direct target of the hooded man, and Smiley Bone is just smiling and playing his uke. They travel across the world to save it, and pandaemonium, hilarity, and terror ensue.

Bone is a very light-hearted set of novels, it really is. I mean, the two best characters in the whole series are villains, rat creatures to be more precise. They’re constantly arguing because one of them loves Quiche. Big time. It’s hilarious. Also, there’s a whole section about Smiley Bone’s love of sandwiches. This silliness is prominent all throughout the series, even though there are lots of genuinely serious things happening. At one point, they’re walking through a wasteland of what used to be a tree-filled valley. It’s nothing but ash now, and ash is still falling. A full-scale war goes on in a giant castle towards the end, and somebody get’s hacked off at the waist. And while all that’s going on, Smiley is still making shenanigans with the rat creatures and Fone Bone is struggling to hold up a sword. It’s a perfectly seamless blend of humour and action and drama, and it’s unbelievable fun to read. Give it a shot.