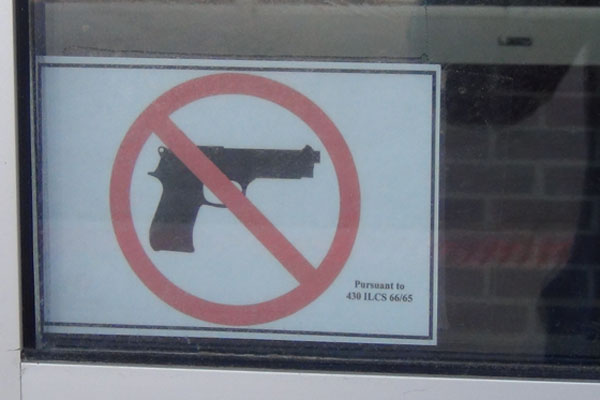 Signs prohibiting concealed-carry in a high school are posted at RB’s doors. Do these signs deter gun violence or encourage it? (Kate Alaks)

Signs prohibiting concealed-carry in a high school are posted at RB’s doors. Do these signs deter gun violence or encourage it?

The state of Illinois passed a concealed-carry law which went into effect January 5. This law makes it possible for people to get permits to carry their guns around with them secretly, the idea being that they can be used for defense. Places such as Brookfield Zoo and RB have signs on them which prohibit concealed carry; if you take a gun into those areas, it’s a serious crime.

Should this be the case?

A number of community members have been commenting on this issue in local newspapers.  Some have expressed the opinion that no-concealed-carry zones make the school vulnerable and suggest not only allowing concealed carry but also arming teachers or security guards. Others believe it makes the building much safer, and that arming school personnel would just be heightening the risk.

These adults can talk it over all they like, but in the end, the students of RB are the ones most affected by this policy, and the ones who will be feeling safe or unsafe in this building. After the “soft lockdown” scare on February 21, the issue has become more relevant than ever to us.

To that end, we bring you the first-ever Clarion Editor’s Roundtable.

This is what we think.

Guns have no place in schools

Like it or not, concealed carry has come to Illinois. The thought of everyone walking around with a gun doesn’t make me feel any safer—in fact, I think it will only lead to more unnecessary problems. I won’t use this column to debate the legality of concealed carry, but one thing is for sure; guns have no place in a school. RB shouldn’t have armed security guards or arm the teachers, and we should not permit concealed carry in the building.

Some argue that having armed security will prevent school shootings, but I don’t believe this is the case. Those who commit these crimes wouldn’t be deterred by a threat to their own life. They are most likely deeply disturbed and need to seek mental help. Guns have never been allowed in the school before, and I’ve always felt that we have had adequate security. Allowing staff members or visitors to carry guns won’t stop criminal activity. It would only be a matter of time before there was an accident and someone was hurt or killed.

Concealed carry is now law of the land in Illinois. This is the reasoning behind those no guns signs that are now on the school building that bring up the idea of guns in schools.  To me, the idea of having weapons in the building is crazy. Seeing weapons throughout the day would make me uneasy. In addition to that, they would be absolutely unecessary.  School shootings are not such an epidemic that teachers and security guards should be armed. These tragedies that happen can be stopped in other ways- and the effective way to stop school shootings does not involve more guns. Another reason why having guns in the school building isn’t a good idea is the possibility of accidents happening. More guns around would increase the possibility of someone getting injured.

Compromise is very important when you try to accomplish a goal with two sides who won’t yield and are arguing over a very controversial subject, such as concealed carry. I am a firm believer in the right to bear arms. It is our 2nd Amendment, and the need for self defense is very important at times. However, this doesn’t mean anyone can walk around with a gun, wherever they go. Background checks should be high priority, and large magazine capacities are not necessary either.

To outlaw guns entirely is ridiculous.  The bad guys, gangsters, thugs, etc. will always get a gun, and they certainly won’t be concerned about carrying a permit for it. Now with 3-D printers, who knows what is possible to make, such as printable firearms? So really the only people who are being affected are the law abiding citizens who want to protect themselves.

I don’t believe RB should post the no guns sign on school doors, because if someone is carrying a gun with malicious intent, they will not be deterred by a sign. In fact, the sign being there would only reinforce the fact that the shooter would have an upper hand because there would be nobody firing back at him.

Does that mean anyone with a gun should go into RB? No, it does not. As far as guns in RB go, I don’t belive it would be wise to arm teachers, because the atmosphere in the school would have potential to be very negative, and it does not seem like the right thing to do. The most beneficial thing would probably be to have a police officer at school, as they would be a welcome presence to help with some of the disturbances in the hallway, and someone who is trained with a gun and has experience with it. However, RB is a very safe school and has handled all intruder and lockdowns very professionally. That also doesn’t mean RB should keep the no gun signs up either.

The no-concealed-carry signs posted on RB doors are not a sign of vulnerability. They do not proclaim that we are sitting ducks; they tell people that RB is not a place for gun violence. If somebody is determined to come in and shoot us, the sign won’t stop them, but neither will the lack of the sign. They are not thinking rationally, and so a rational fear that they might get shot is not necessarily going to be present.

Rather, the sign protects us from rational people who might happen to be impulsive and also carry guns, who aren’t intending to break the law. They keep RB from an atmosphere of fear, not only the constant thought of “what if there was an intruder” which would be brought to the forefront of people’s minds whenever they thought that teacher or this security guard might be carrying a gun, but the fear of “what if something happened within the school.”  I wouldn’t trust even my favorite teachers with guns, nor would I feel comfortable knowing the security guards were armed. Whether or not such a thing would happened, I would be paranoid that something would go wrong.

I think that gun control is an important topic that needs to be taken seriously. I do not think it is ever acceptable for any person, other than law enforcement, to carry a gun in public. There are far too many unstable people who have access to guns in our society. This has been proven through the growing number of school shootings over the past number of years. In our society, children fear shootings, and that is a vastly different climate within schools than there has been in the past.

Though I do believe that carrying a concealed weapon in public should not be acceptable, I do not think that banning all ownership of guns is the answer to the problems facing our society. Ownership should be allowed, but more extensive restrictions should be put in place. I think that the background checks for those looking to purchase guns should be more extensive and the police should be informed of where are guns are owned in their neighborhood. There is no clear answer to solve this problem of gun violence in our society but there are ways to make it more reasonable.

The fact that Illinois would even allow such a law like concealed carry to take effect saddens me. It’s bad enough that people carry weopons illegally, but to just go and say that its perfectly fine is just upsetting. I personally would not feel comfortable walking arounds in public, let alone school, knowing that someone could have a gun on them. Sure, they may put up a “no-concealed carry” sign on the front door, but that really won’t stop someone from bringing one in anyway. I feel like you’d just be asking for trouble by doing so. Also, I do not think that it is necessary for the security guards to have guns on their person either. There is a very slim chance of them ever needing to use it, plus if for whatever reason it gets stolen, that would be a huge problem that the school would have to deal with.

RB should have a no-concealed-carry sign because guns should not be permitted in a school environment. Having guns in school would not make anyone feel any more safe, and they definitely won’t solve any problems.  I think adding guns to the school environment would just cause more tension amongst the students. Everyone would feel on edge and fearful of an outburst. Think about all of the fights that go on. What if one of those situations involved a security guard with a gun? Think about how quickly that situation would escalate.

I do not believe that having a no-concealed-carry sign on every door will have any effect on RB.  This doesn’t mean that the signs shouldn’t be there.  In a legal sense, they have to be on every door so that people know the law.  From a logical standpoint, there is no situation where these signs will change anything.  If somebody happens to have a gun concealed on their person and is about to enter the school, it will either be A) for some form of criminal intent or B) because they can carry their gun just about everywhere else and they didn’t notice the signs.  The target demographic for these signs does not exist.  This (non-existent) group would be the people who carry a gun, but then notice the signs, read them, and then say to themselves, “Gosh, I was not aware of this law.  I’m glad I took the time to read that sign or I would have committed a crime.  I’m going to go put my gun in my car.”

Minor changes like this do not affect our safety.  This includes the inane suggestion that security guards should have guns in the school.  The notion that “the only way to fight a bad guy with a gun is a good guy with a gun” has no merit at all, especially when it is applied to a school setting.  There is probably a greater risk of an incident happening if RB’s security has guns.  To me, there is a much larger chance of security personnel in the building losing a gun or having it stolen then there is of somebody bringing a gun in.

All in all, we shouldn’t be wasting so much time and money on such matters.  Yes, it is important to have good security for the safety of the school, but the steps being taken to improve it are trivial and most of the ideas are unrealistic or would have no tangible effects.  The chance that somebody brings a gun into the building is already slim and the chance that somebody would bring a gun into the building with the intention of using it is pretty close to zero.  It’s great to have policies or plans set in place to protect the school, but the reality is, if somebody wants to bring a gun in (whether or not they intend to use it), there is nothing that will physically stop them from doing so.