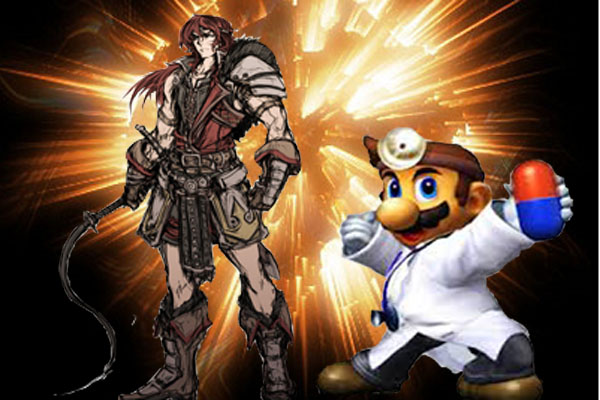 When it comes to Super Smash Bros, I like to play on the offense. That’s why my first choice would be Simon Belmont from Castlevania.  Think about it, Simon Belmont would be awesome in Smash Bros. Is he a third party character? Yeah, but so what? They can have Solid Snake, or Sonic in their game, but no Simon Belmont? The Castlevania games on the NES were amazing. I would like to see him use his whip like he does in the Castlevania games he appears in, but it would also be cool to see him use Holy Water to freeze enemies for a short period of time, and he could throw Axes when attacking enemies in the air, and using knives for enemies on land. The only thing that would be challenging, would be his final smash. I’m not sure what they could use for it, but the people who work on Smash Bros are creative, so they’ll come up with something.

Now, I noticed that my favorite character of all time hasn’t returned yet. That character is the almighty, amazing, and super duper awesome Dr. Mario. Yes, I would like to see the greatest character in Smash Bros make a triumphant return in the upcoming game. Why Dr. Mario? Why not just play as Mario? Well, in Melee, Dr. Mario was basically an amped up better version of Mario. The only downside of Dr. Mario was that he was slower than regular Mario, but that’s cool, because he was stronger than mario. Also, Dr. Mario had style. For real, he threw megavitamins instead of the fireballs! Plus he looked like a Doctor! But just as Mario! How cool is that?! I would also like to see for his final smash, to be the three Red, Blue, and Yellow viruses to pop up on the screen, and attack his opponent, and then have Dr. Mario finish off his opponent with a giant megavitamin, to throw them off screen. That would be amazing.