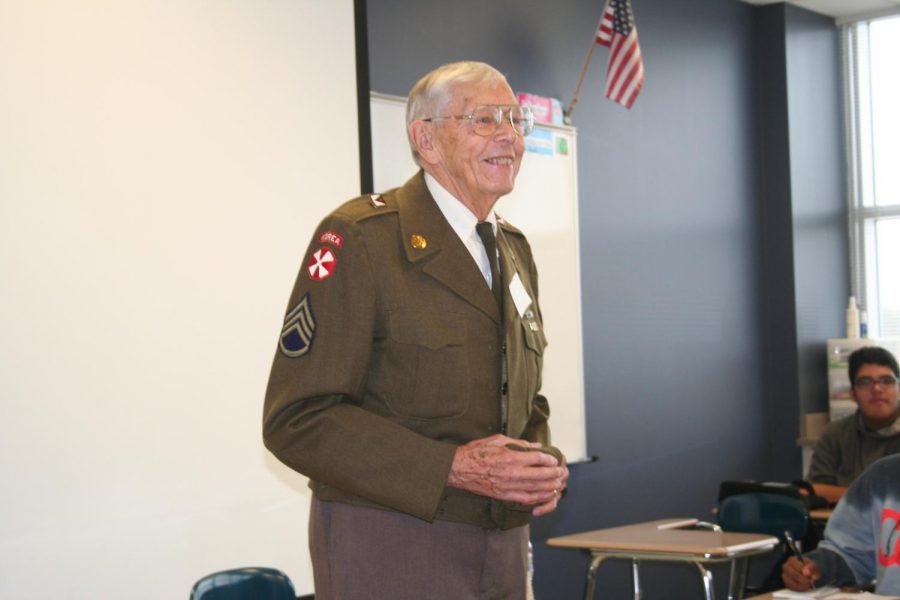 Dick Vabro sharing his military experience with the students.

Dick Vabro is an American veteran of the Korean War which began in 1950, when North Korean communists invaded South Korea, and lasted until 1953, when a ceasefire was signed. However, according to Vabro, the historical event should not even be labeled as a war.

“I am a veteran of the Korean conflict. I am using the word conflict simply because our government never did declare a war against North Korea, so the technical term is conflict,” said Vabro.

In 1951, at the age of 20, Vabro was drafted into the army, meaning his enlistment was involuntary. Vabro for the most part was not surprised at being drafted because during the time period it was so common.

“I expected it because at that time there were many more men going before me. I had an associate’s degree and I thought I was set out for accounting and all of a sudden I was in Korea,” said Vabro.

Before being deployed in Korea, Vabro endured four months of rigorous training. He entered through the port of Busan in 1951. Due to Vabro being drafted, his time of service had to at least be two years; he ended up serving thirteen months instead. While deployed, Vabro became an engineer in his personnel.

“I was fortunate enough to be assigned to the 79th engineers in Korea. We were stationed near Seoul, which is the capital of South Korea, and then we moved further north to Yong Dong Po. Our responsibility was to maintain the roads and bridges which had been bombed from the earlier hitmen,” said Vabro. “I became the personnel sergeant. My responsibility was to recruit or replace personnel who earned their rotation points to go back home.”

While stationed in Seoul, Vabro was in the headquarters company and was usually far away from the demilitarized zone, where all action was taken. Communication between soldiers and their family was not always easy; you had to contact them by letter but stamps were not allowed. During the time, only a radio telephone was available and the huge time difference between the two countries made planning phone calls difficult. Vabro participated in fun pastimes occasionally.

“We did have a baseball team, but there wasn’t too much time allocated for that because we were pretty busy with the rebuilding that was necessary,” said Vabro.

After Vabro completed his 13 months in Korea, he returned to the states where his family was and pursued a career.

“I switched careers. I was with the Elkay Manufacturing Company for 38 years. I became the senior sales engineer. I read architectural drawings and made bids on our equipment,” said Vabro.

Vabro is now currently retired and lives in North Riverside. He says he enjoyed his time in South Korea and would absolutely love to revisit again, mainly to spot key differences between now and the 1950s.

“I would like to see how it has changed. South Korea and North Korea are complete opposites. South Korea is just a marvelous country that has excelled in industry, science, and education. In North Korea people are actually starving there because their food supply is not adequate. The north is communist and the south is a republic,” said Vabro.

Vabro, along with many other people around the nation, are deeply concerned about America’s and North Korea’s relations.

“I hope that everybody has been reading or watching the news because all of a sudden, after 65 years, Korea is back on the hot spot,” said Vabro. “I cannot believe the current regime of North Korea [Kim Jong Un], who is now the third generation of Uns, is now threatening all of the nations in which we [America] have occupied troops.”

Kim Jong Un has publicly announced that South Korea, Japan, and Guam (places in which the United States have troops in), are all possible targets of his missiles. There are ongoing rumors worldwide that North Korea is supposedly carrying a nuclear warhead. Vabro says a huge component of America’s current rocky relationship with Korea has been president Donald Trump’s tweets and public announcements relating to the topic.

“Initially when Kim Jong Un made the threats, President Trump was quite perturbed, and he lashed out at Un and he said ‘If you start anything, we will annihilate you.’ It’s true, with our weaponry we could certainly do that. If that were to happen, the results would be disastrous because millions of people would be destroyed,” said Vabro.

During the Korean war in the 1950s, Vabro says the United States lost over 34,000 men and technically a war never really occurred. Therefore, Vabro is worried about our country’s current situation.

“I’m very concerned with this. I hope hotheads do not prevail. A war could be started all over again. Initially, president Trump was quite ‘hot’ in retaliation, but he has been calmed down. I was happy to hear his speech when he was there [Korea] Tuesday evening. He went from threatening Kim Jong Un with retaliation to a more peaceful action,” said Vabro. “Our current secretary of state is recommending diplomacy and I think that president Trump has concurred to that and is trying to calm the fears [of citizens].”