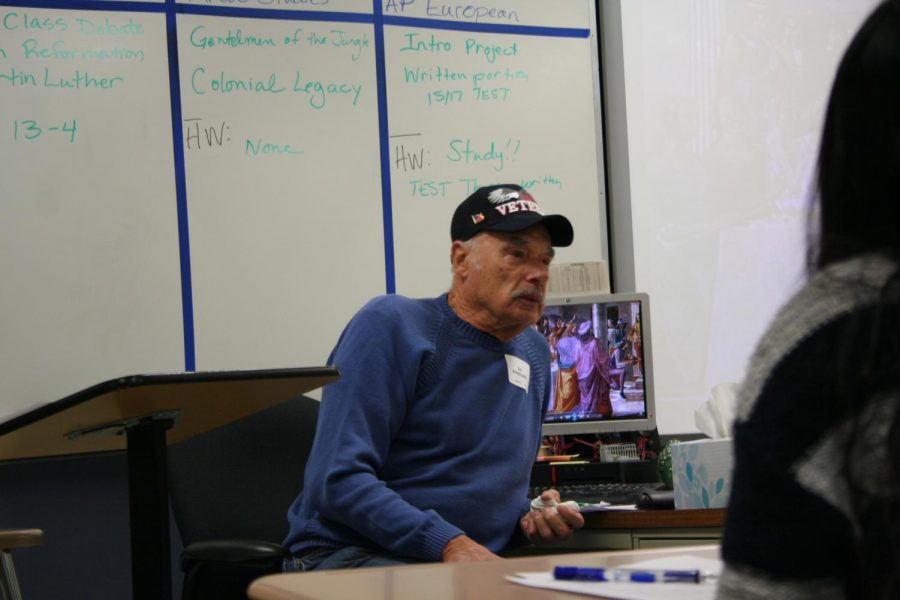 Armbruster tells his story to students.

Ed Armbruster served in the United States Army for 22 months and ten days during the Korean war. Armbruster grew up in a small town on a farm, and worked with cows and other farm animals up until the day he left.

“I can’t tell you how many things I left undone,” said Armbruster.

Armbruster decided to enlist in the military only months before there was a large draft.

“I figured I’m out of school, what am I going to do? I’m a farm boy, I was born in western Illinois, and I had a couple buddies I would hang out around and we all decided we were going,” said Armbruster.

Although Armbruster is still suffering life long effects after being in the army he says he does not regret anything he did.

“I had a good life. I worked hard. I don’t regret anything I’ve done. The military don’t hurt anyone,” said Armbruster.

When the people serving in the Korean War came home, there was a lot of hate and disrespect for our veterans. Armbruster said he faced the brunt of the hate.

“I decided to go to the candy store because I have a sweet tooth, and I still had my uniform on because I had just gotten home. They did everything but spit on me,” said Armbruster.

Armbruster has done many things after he left the military. He was the top diesel mechanic for 50 years after attending school in St. Louis when he came home.

One thing that stayed prevalent throughout his life was baseball. In high school he played baseball as well as with his friends after school. Even when he went into the army, baseball was still an heavy influence in his life.

“I found my buddy from high school. I had played baseball with him, but we didn’t talk about baseball. We talked about bombs and destruction,” said Armbruster.

Armbruster continued to reiterate the importance of making change and our generation doing better.

“But you guys are different, thank God for that,” said Armbruster.