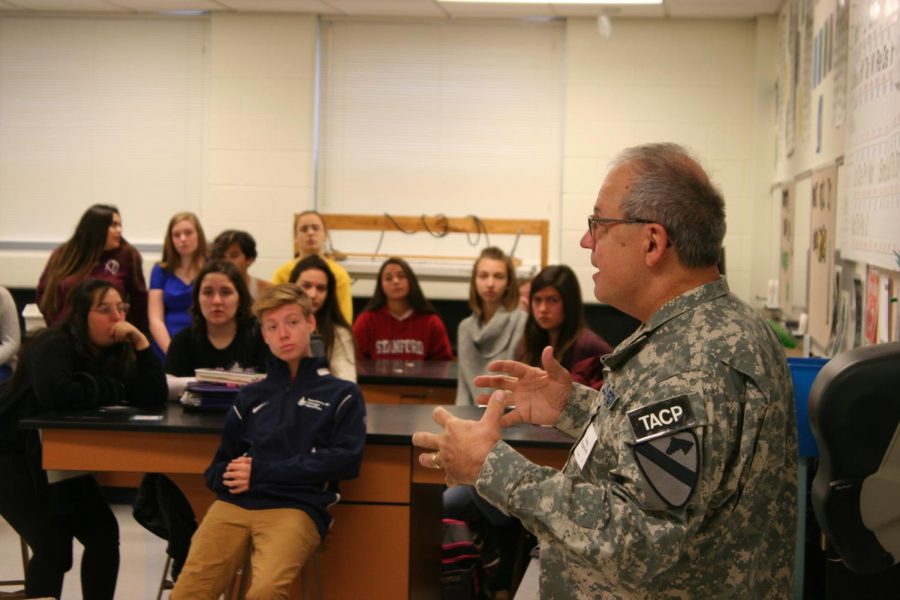 Greg Saganich, now living in Riverside as a part-time cop with a wife and two kids, served in the army beginning at the age of twenty-one.

“Early on, I knew I wanted to get into the service to pay back America for what I was given. I went to a great college, a great job right out of school, and I decided since I been blessed with so many different things that it was time to return some of that to the country. People do that in various ways, I chose the military route to do that, so in 1978, right out of college and after getting my first job, I went down the street and enlisted in the army guard,” said Saganich.

Serving one tour in Iraq, one tour in Egypt, and one tour in Afghanistan, his positions in the army varied, starting in Army Reserve and re-positioning to the Air Force.

“I started out in the army reserve and for sixteen years I was a door gunner and a flying mechanic, a crew chief on the huey helicopters. And then from that position I moved over to the Air National Guard where I was a Tactical Air Control Party: that’s an Air Force guy who’s assigned to the army because they need somebody who can control the precision weaponry that we have now,” said Saganich.

He also talked through a radio from the aircrafts in order to ensure the safety of his men as they handled deadly weaponry.

“They don’t want army guys on the radio talking to airplanes telling them where to drop bombs because there’s a big chance that they could drop them on themselves, so they usually stick an Air Force guy like me in there on the radio to talk to the drones and the helicopters and the bombers and the A-10s to direct the air strike and do what the ground commander wants to do without inflicting losses on his own people,” said Saganich.

His experience in combat lead to a near-death experience which fortunately was not fatal.

“I do recall one time we were next to a canal which I really forgot we were next to, and we had the night vision goggles on because it was a nighttime mission and I was the driver of the Humvee.  We were starting out on a convoy and because we had the night vision goggles on, the peripheral vision was very limited. So I started driving and the guy next to me started beating on my helmet telling me to ‘stop! stop! stop!’ because I was actually driving us into the canal, and given all the weight of the vehicle and the weight of the body armor that we had on, we probably would have died if I had driven us into the canal,” said Saganich.

Saganich also recalls a “dumb” moment of his that could have resulted in tragedy as well.

“One of the dumbest things that I did was when we were out miles nowhere and we had to set up a perimeter, and I had gone out to stand perimeter guard. Then all of a sudden over the hill comes about eight Iraqi kids. They all came towards me and they stood there next to me and I tried to teach them some English and I even took a few selfies. Any one of those kids could have had a bomb and taken me out,” said Saganich.

Altogether, Saganich describes the mood which was present throughout his time in combat.

“It was tense all the time. Once you were outside the wire you were a target, so there really wasn’t a lot of ‘outside the wire stuff’ unless you were on a mission. You didn’t know if the people in the towns were your friends or your enemies. Outside the base in Iraq, they were always planting roadside bombs around the base to kill us and so a lot of times I was flying the drones overhead to look for the guys who were planting the bombs or to find the bombs in the roads,” said Saganich.

It was a frightening experience, and for Saganich, lives were on the line on account of his decisions. As a result, he was in constant worry.

“I was scared a lot because everything that I did, especially as Air Traffic Controller I could get somebody killed, so I was scared a lot of the time and really worried about what my actions would involve and what the repercussions would be of a mistake, so I didn’t want to make a mistake,” said Saganich.

Although it was a scary time, he still felt in touch with his family due to the resources the army provided.

“Service men have access to satellite radio, the Internet, and Skype, so you’re feeling what’s going on at home real time. If my kids were sick, I knew about it that day,” said Saganich.

Saganich explains other commodities were provided at the base in order to make soldiers feel more comfortable.

“Since they captured the base from the Iraqis in the earlier war, it had a tremendous gymnasium with a swimming pool, so you could work out anytime you wanted to, and there were always big computer rooms where you could get on the Internet and Skype your family back home,” said Saganich.

On arriving home, Saganich explains how the transition was easy and great for him.

“I’m lucky because I have a really great support network: a tremendous family that was with me through everything. Also coming back, the National Guard does a good job of helping you transition. They actually put you on a suicide watch for 90 days,” said Saganich.

Reflecting upon his time in battle, he explains the toughest aspect of all.

“Just the fact that I’m never ever going to get to go back and see the results of what we did. You know at the end of the Second World War, Europe was liberated, and now guys go back there and visit the battlefields they fought on and the people they helped save. I don’t think there’ll ever be a time where I will go back to Iraq or Afghanistan to see the fruits of our labors which right now are in question,” said Saganich.

However, Saganich looks upon his time at war as very enriching. His final rank was Staff Sergeant.

“Without hesitation at all I would do it all over again. Maybe do some things differently, but I would serve again in a heartbeat, and I’m still what they call inactive ready reserve which means they could still call me up,” said Saganich.

Stories like these truly humble us as Americans. We thank you Greg Saganich, and all veterans across America. You will never be forgotten for your bravery and strong pride in our country. It has deeply inspired us and we are grateful for your service.