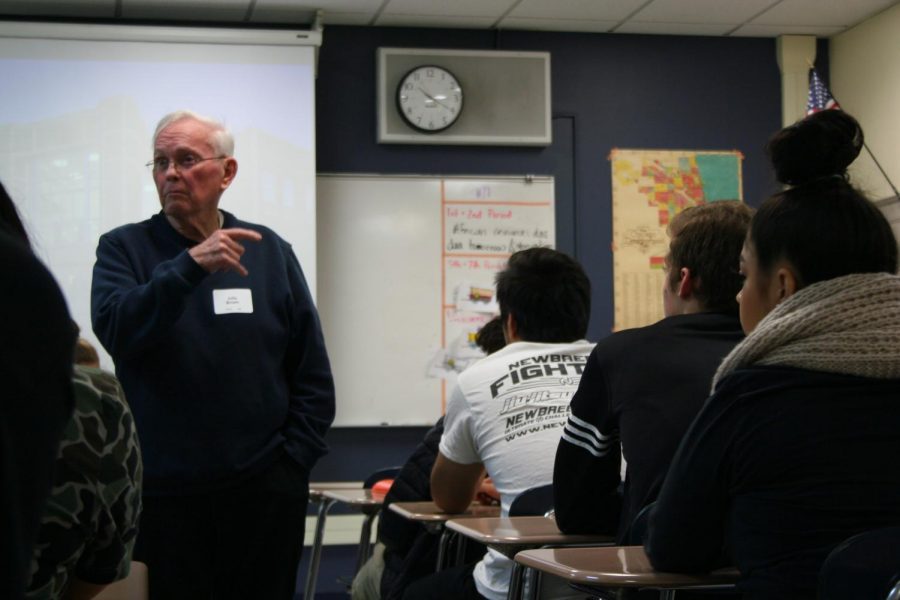 Jolly Brown served in the Navy from 1951-1955 during the Korean War. Brown is originally from Alabama and moved to Illinois when he was sixteen years old. During his time in service, Brown was a radar man.

“So I joined the navy and went to radar school, I wanted to be a sonar man because I had seen it in a movie, and in the movie it looked exciting to be a radar man, all these sounds, and discovering the submarines. But they gave me a test and all the sounds sounded the same to me so needless to say, I wasn’t a sonar man, but they put me in a radar school because they said my math scores were good,” Brown said.

Brown enlisted in the Navy because the draft was going on at the time and he believed the navy was the best option for him.

“The reason really, is I would go downtown to Chicago every 2 weeks, the Chicago theater would have state shows as well as a movie. Right by the theater corner there is a Walgreens drugstore, and there were all kinds of girls in there and all these sailors were in there from the great lakes, I thought god if I join the navy, I could probably get a girlfriend,” Brown said.

During his active duty, Brown was on a warship, working the radar. The main job of his ship was to fire guns.

“I was on a warship and so we fired guns, we got shot at only when we went to one place, Wonsan harbor, but outside of that we fired all the time,” Brown said.

Brown met many interesting people over seas and overall enjoyed his time in the navy.

“Its very interesting to meet all these different kinds of people that we met and the ones you have them up on the ship, you get very tight with some guys, you work with him all day long, for 3 years I was on the ship from Christmas so 51 till March of 55 and I really enjoyed the navy. I think it wasn’t a bad life,” Brown said.

Overall Brown believes the military is not that different from any other job.

“That’s all the military is, like a job, you do your job, you just keep repeating, it’s all repetition” Brown said. “ I never thought I did anything, and as most veterans will feel, we don’t understand why we stand up and let everybody applaud, but it’s nice”.