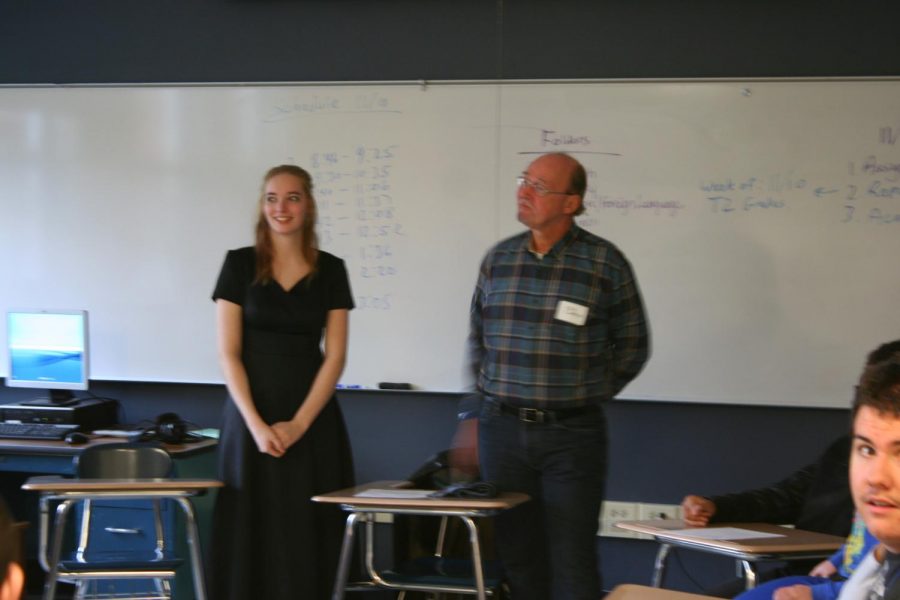 The Riverside Brookfield High School’s Veteran’s Day assembly had a very special purpose to those who were able to attend the assembly.

After the assembly, in room 151, a special forces soldier, Ken Curelo, told students of Danielle Delzotti’s 2nd period his story. This is his story…

Curelo grew up in LaGrange, Illinois and was drafted into the United States Army in 1969, he was a student at Southern Illinois University and was not doing well, so they pulled his exemption and was drafted. When Curelo scored exceptionally high on the Military Test, he was offered about any job in the Army.

While in the forces from 1969 to 1972, he didn’t have the ability to email his family because it didn’t exist yet. So instead, he wrote to his family through letters.

Eventually, Curelo became a medical E-6 Sergeant, also known as a Staff Sergeant, for an A-Team, a Special Forces team consisted of 2 officers and 10 sergeants. By the time he got done with his training in 1971, the Vietnam War was ending.

Even though he was done training, he wasn’t respected by the people of the United States. He can recall that if you wore a uniform in an airport, people weren’t as nice to you due to the Vietnam War.

Curelo was eventually put in charge of hospital projects and was eventually discharged in 1972. After his discharge, Curelo continued his education to help in the projects he did back in the Special Forces.

The projects he worked on were intended to build and maintain hospitals for wounded soldiers and the poor of a county in North Carolina.

During his service there, Curelo was an assistant physician in the Emergency Room. He was a bit disappointed for not being able to fight in the Vietnam War.

While a manager for these projects, he treated the workers that worked for him with respect and as equals. He also had an “open door policy” as long as he wasn’t in a private meeting.

His story still even lives to this day. And some of his wisdom is true about the world we live in today.

He told the kids in the room that, even if you defeat a terrorist organization like ISIS or Al Qaeda, there’s always going to be a new organization that’ll take their place.

Some advice when asked he gave to the students is “treat others the way you want to be treated.” People should live by that piece of advice.

And thus, writes another chapter in the saga of Mr. Ken Curelo’s life.