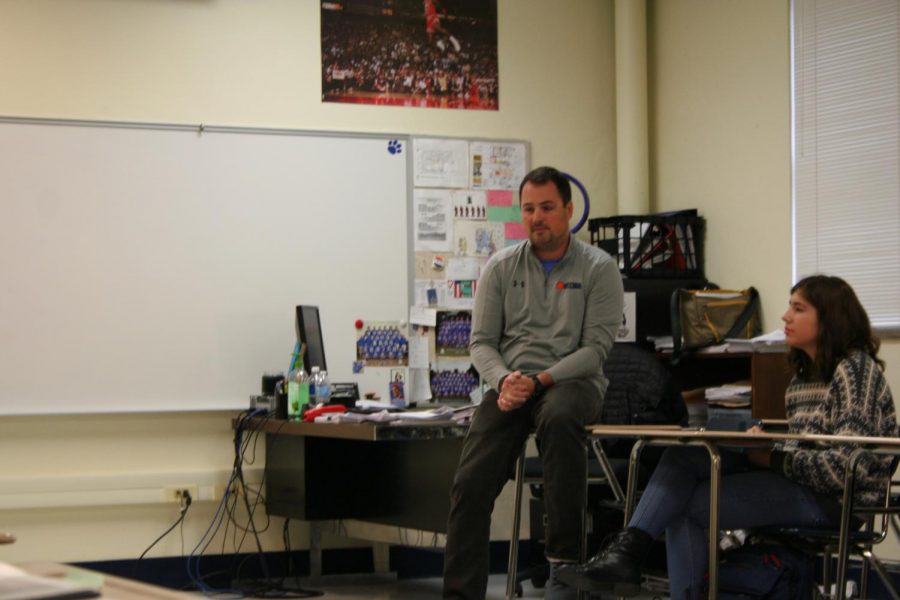 Veterans are very respected, and our country is grateful for what they have done to protect us. Veterans Day is a great way to express respect for U.S. veterans, and the assembly that took place in the main gym was an amazing experience. After the assembly, the veterans that came went up to assigned classrooms to talk with the students about their war experiences. Kevin Turk, a part of RB staff, was one of the veterans who talked to his class about his experience in the U.S. army and navy.

Turk served in the Navy and as a Scout Sniper in the Army. He expressed that he was lucky that he did not have to be deployed to a war.

“I’m very fortunate because I went in at a time when there was no real threat to be deployed overseas,” said Turk.

He also told us that he did not compare himself to the veterans downstairs.

“Those guys downstairs have been in some pretty tough situations. I don’t think that my experiences were the same as some of the guys that have been deployed,” said Turk.

Turk said that he likes that the U.S. honors their veterans every year. He did say that he wishes the government paid for the medical care of veterans.

“If you serve, and you’re willing to put your life on the line for our country, you should never have to worry about health care again,” said Turk. “Our government has the money and the resources to do that and they’ve never done that.”

Turk’s scariest experience was a helicopter water pickup. He was in the ocean with gear on and had to wait for hours for helicopter to hover down and pick him up. He discussed how he has thrown a grenade and even flew a plane.

Turk said that his main reason for joining the military was that he needed to pay for school and they would pay for him.

“I needed to pay for school and that was my primary purpose for joining,” said Turk.

He also said that one of his reasons for joining was keeping up family tradition.

“Every male member of my family has been in the military at some point. Both of my grandfathers served in World War II, my dad served in Vietnam, so it’s kind of a tradition as well.”

Turk mentioned that being a sniper was not what people might picture.

“I was not out there assassinating people. I wasn’t out there wearing a Ghillie Suit hiding in the weeds shooting at people,” said Turk.

He explained what a scout sniper’s job is.

“A scout sniper is more about providing cover for your fellow troops to move forward during battle,” said Turk.

“I’ve done some pretty neat stuff, and I don’t regret it at all. Like I said, I am very grateful that I signed up when I did and I’m the age that I am because there wasn’t much going on when I was enlisted,” said Turk.

Whether or not Turk got any action does not matter though, because he is still a veteran and the U.S.A. truly appreciates what he and other veterans have done for the country.