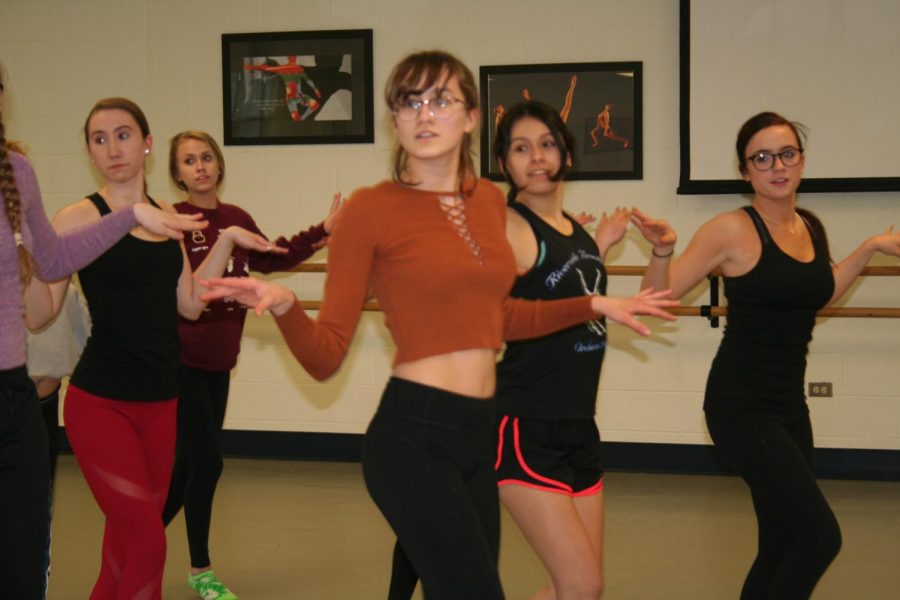 RB dancers. There aren’t a lot of us, but there’s a lot going on for RB dance. Before we start discussing how school spirit impacts the dance world at RB, let us explain to you the virtually unknown process it takes to create the two dance shows per school year.

In order to participate in RBHS’ Repertory Dance Ensemble and Orchesis, students have to audition with student-choreographed dances they’ve learned over multiple days in workshops lead by veteran RDE and Orchesis dancers and sponsor, Madelyn Doyle.

For those who are still unaware, RDE is the honors-level dance class, and Orchesis is the after school dance club. Both groups perform throughout the year; RDE in late fall, and Orchesis in mid-spring.

Almost all of the dances in the shows are student-choreographed, meaning students choose the music (and sometimes edit their own music), arrange the formations, and create original movements. We spend over two months learning around 16 dances that will be showcased in the winter RDE concert, and it’s a laborious process to say the least. Two choreographers cannot choreograph in the singular studio at the same time, so choreographers often relocate to somewhere else in the school to rehearse.

When we do, though, our space is rarely respected; the hallways are usually full of gym students who mindlessly walk through the dance or direct rude comments toward the dancers, making it extremely challenging to focus on your artistry and vision.

The amount of work and time dedicated to the production of one dance performance far exceeds many people’s assumptions about the dance world at RB. This is why it’s such a let down to receive minimal support from the school and the student body. Where the theater department sells out shows and packs the auditorium, the dance department sees low attendance and little promotion. And it’s not because of a lack of interest; those who see the in-school shows consistently praise dancers for their performances. So why do we struggle to gain exposure?

Backstage, the walls are lined with posters signed by the administration supporting and congratulating the theater department on their performances. It’s a little discouraging to know that we perform the same number of shows each year on the same stage as the theater department, but still go unacknowledged by so many.

All we wish for is to gain more audience members, aside from our parents and close friends. Dance productions at other schools, such as the Eurythmic Dance Company at Lyons Township High School, are taken very seriously and are eagerly anticipated. They see the same full crowds we see at our plays and musicals and are known for their quality performances.

We just want people to appreciate the work we do, and show us the same support they would a sports team or the theater kids. Our shows have a lot to offer, and we genuinely believe audiences would enjoy the performances if they attended.