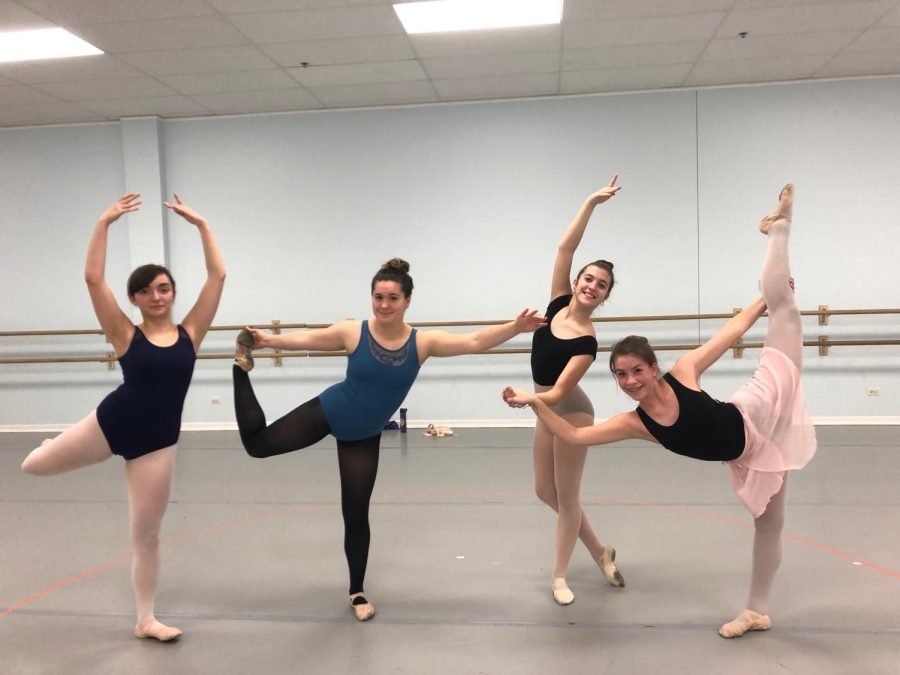 Sarah attempting to do ballet with dancers in the class.

The music begins. I can feel the beat echoing through my body. My feet are pointed, enveloped in dainty pink ballet slippers. I breathe in through my nose, allowing the oxygen to travel through my body. I then exhale through my mouth, blowing a small wind into the otherwise static dance floor. As the music introduction ends, I hear the instructor count me off, “Five, six, seven, eight…” I step off and succumb to the movement…

I instantly lose balance and fall to the ground.

Flashback to three weeks ago: I’m sitting in a regular Clarion staff meeting. During a brainstorming session, Bella Brick announces that she has a crazy idea for an article. She wanted to see what would happen if two serious athletes swapped sports. A ballet dancer herself, she asked if anyone would volunteer to switch with her. As a competitive swimmer with virtually no dignity, I jumped at the opportunity. How hard could one dance class be, right?

I took ballet classes for about two years when I was a toddler. In other words, I fancied myself an expert. I also have very remedial training in tap and jazz, as well as theater dancing for musicals. In other words, going en pointe would snap my ankles in half, but I can do a killer grape vine and kick line.

Bella, on the other hand, has been doing ballet for 13 years. This meant that not only would I be doing ballet, but I would be thrown headfirst into her advanced class. What could go wrong?

The day is finally here. I went to the class straight from swimming, so my hair was still dripping wet. I did my best to tie it into a “ballerina bun,” and prayed that it would stop leaking all over me by the time I arrived. The last thing I needed was to create a puddle for me to slip on and end up breaking my neck.

When I walked into the waiting area outside the studio, all of the real dancers introduced themselves. The first thing I noticed was, oh no! Their tights are outside of their leotards! I had put my leotard on over my tights! Isn’t that what ballerinas do in the movies?

Knowing I had already made a fool of myself, I sauntered into the studio. It was then that I noticed some other dancers, and hooray! They had their leotards over their tights! An instant feeling of relief spread through me, in addition to an unearned sense of confidence in my dancing abilities.

This sentiment would be extremely short-lived.

We began with warm-ups. This entailed moving my limbs in steady and graceful movements, usually while balancing on one tip-toe. Or should I say, the dancers executed steady and graceful movements. I was flailing my limbs about like a swimmer out of water, desperately trying to keep up with the group as they moved to a piano version of the Harry Potter theme song. As the instructor shouted out different dancing terms, I instantly regretted not taking French in school. I became quickly overwhelmed, and simply attempted to replicate the movements of the girl in front of me.

Half an hour in, my legs and feet were already killing me. We eventually moved on from warm-ups and began “across the floors.” The instructor would show us a series of movements, then throw on some music and watch us execute them. In that moment, I wished I was the one being executed. This meant that I couldn’t hide in the corner of the room! I would be out in the open for all of the serious dancers to judge me. To make matters worse, I wouldn’t have the barre to hold on to for balance. What if I fell on my face?

I gave it my Bulldog Best, but as expected, I failed miserably. As I pitifully attempted to do a tour jetè, the instructor pulled me aside to show me how to do it correctly. I did it correctly once with her help, then immediately butchered it again when we returned from the other side.

To end the rehearsal, they practiced a number from their upcoming show, The Nutcracker. Since I am not in the show for obvious reasons, I became a one-man audience and got a sneak peek. After watching myself embody a foal emerging from the womb and taking its first steps for close to two hours, it was refreshing to view experienced dancing.

When the number concluded, the class was over. I packed up my things, slipped out of my ballet shoes and into sneakers, and left the studio with throbbing calves and a newfound respect for ballet dancers. When I got home, I immediately headed to the kitchen and ate a shocking amount of food to replenish my energy after a long day of extremely diverse, yet physically demanding activities.

While I did learn a lot about dance technique and have a fun, if not emotionally draining time, I am clearly not made for land activities. Who knows, maybe Bella and I can combine our strengths and take on synchronized swimming?

Special thanks to Bella Brick and Principle Dance Studio for allowing me to attend a rehearsal and go along with this crazy idea.