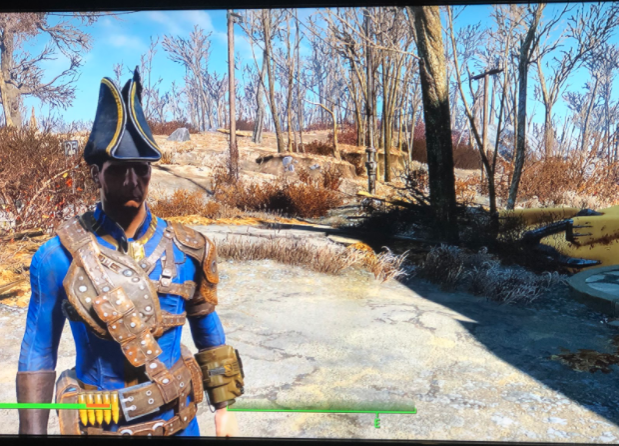 A screen cap of John playing the game Fallout 4.

During my quarantine, I haven’t been doing much. I’ve been sleeping, I’ve been doing school work, and I’ve been playing Fallout 4. Although Fallout 4 came out in 2015, I never got around to playing it. I was always intrigued by the concept of the Fallout series; You get to explore the wasteland after, as the game puts it “total atomic annihilation.” I got the game for my birthday, which coincided with the first week of quarantine, and since then it has been the only thing I have played.

I finished the main quest of the game only a couple of days, and haven’t slowed down since. I have put in close to 60 hours of work into two different save files, and have enjoyed learning more about the lore surrounding the game.

Fallout 4 takes place in 2287, 210 years after the world fell apart because of a war between the United States and China. The main character gains access to a bomb shelter and is frozen, only to be thawed out to see their spouse killed and their baby kidnapped. The player is refrozen and wakes up later with only one objective; find their son Shaun.

The game gave me a clear objective, and tells a story of revenge and confusion, as they try to find their son through the irradiated remains of the Boston area. Fallout 4 also supports modifications to the game even on console, meaning that once I was done with the main game I could potentially add a mod that allows me to shoot full cars out of some guns or just making the game looking a little bit nicer, like better-looking grass or making the water in the game look like it is completely clean, untouched by even modern society.

Although I have thoroughly enjoyed playing Fallout 4 for the last month or so, I have found a few small things that annoyed me. I had to find a mod to fix the game because at some point the game had glitched, keeping me from finishing a quest. My other complaint is that the dialogue is often boring, having only four options for every piece of the conversation.

Overall, I have really loved Fallout 4 so far, and I haven’t even discovered half of the locations in the game yet. The game has helped me distract myself from the current world pandemic, and I can tell that I could play this game for years and not see everything that it has to offer. It is no wonder that Fallout 4 won the Game Of The Year award from Academy of Interactive Arts & Sciences.