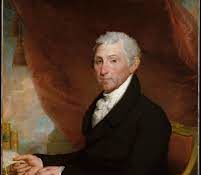 I’m gonna be honest, I didn’t know much about James Monroe before taking on this project, and if you had asked me last week, I would have guessed I could beat him in a fight. Unfortunately, my guess could hardly be more wrong. Monroe was an even 6 feet tall, and after growing up on a farm, he served in the Revolutionary War, in which he fought alongside George Washington, and was injured at the battle of Trenton. On top of the fact that he was a hardened War Veteran who stood three inches taller than me, Monroe was only 59 when he took office, so sadly I’ll lose this one.