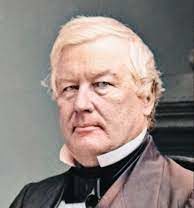 Taylor’s successor, Alec Baldw- I mean Millard Fillmore doesn’t have very much to be said about him other than that he was 6 feet tall and 50 years old when he became President. Fillmore never served in the military, but was said to be in pretty good health, and aside from being a really big dude, he just looks tough as nails. I’m gonna try my best to not overestimate myself here and say Fillmore beats me in this fight unless he’s far less intimidating than he looks.