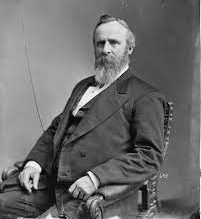 Let’s be honest, no one’s gonna read about 47 different hypothetical Presidential fights, so I found a good place to save us all some time. The Presidents who served between 1877 and 1901, Rutherford B. Hayes, James Garfield, Chester A. Arthur, Grover Cleveland, Benjamin Harrison, and William McKinley were all pretty similar. They were all Republicans and Civil War veterans, except for Grover Cleveland, a Democrat who sent a proxy to fight in his stead. Despite the fact that most of these men had military experience, they were all pretty out of shape by the time they occupied the oval office,  but still all of them were taller and heavier than me. So just to keep things moving along we’re gonna assume I win three of these fights and lose the other three. Garfield might knock me out cold, but I’ll get my revenge by pulling his Vice President Arthur to the ground by his mutton chops. Through 24 Presidents my record stands at 14 wins and 10 losses.