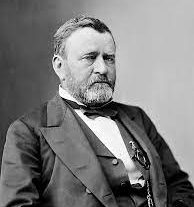 Grant was a career soldier, who despite being just 5’ 7”  served with distinction in the Mexican-American War and was the most successful Union general in the Civil War. Despite being a distinguished soldier he was known to be quite squeamish around blood and would never eat any meat that wasn’ well done, so maybe he’d bail out after landing a few punches on me. However, I think Grant’s penchant for whiskey, and ability to hold his liquor well would help steel his nerves and allow him to beat me pretty easily.