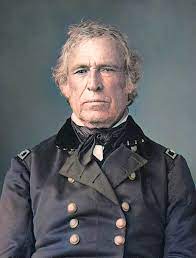 Taylor died just 16 months into his term, but as his death was sudden, rather than the end result of a long illness, we’ll assume that he is healthy for our fight. The former soldier in the War of 1812 made his way up the ranks of the military all the way to Major General during the Mexican-American War. While I would like to think I can beat up most 65 year old men who are an inch shorter than me, I don’t think that applies to people who spent over half their life in the military, so Taylor will end my win streak here.